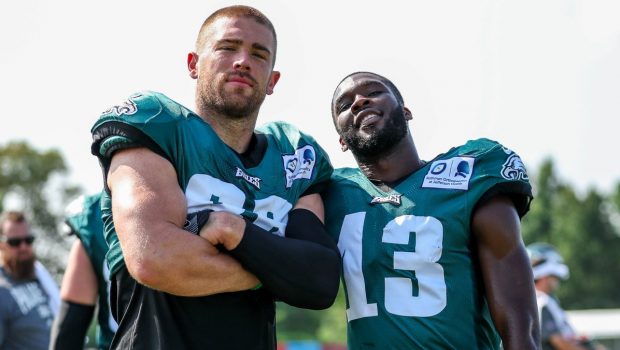 ICYMI: HERE’S WHY EAGLES RECEIVERS ARE RANKED NFL’S NO. 1!

And that doesn’t include the addition of DeSean Jackson, says Pro Football Focus:

It’s not exactly going out on a limb to say that most teams in the NFL would be thrilled to have those four as the core of their receiving unit.

Luckily for the Eagles, that pipe dream is a reality.

Agholor went from a near-bust to a big-time riser in overall grade and in almost every meaningful stat. From a woeful 60.1 passer rating when targeted combined with seven drops on 70 targets in 2016 to two straight seasons of 100.0-plus passer ratings when targeted and just nine drops on more than 180 targets, Agholor has found his footing. He’s a hidden gem amongst veteran superstars who still has plenty of room for improvement — evidenced by his 64.8 overall grade — but the future is bright.

Outside of Agholor’s up-and-down career thus far, the Eagles return one of the most consistently solid groups in the NFL. It all starts with Jeffery and Ertz. The former hasn’t graded below 70.0 since his rookie season in 2012, and his 78.3 grade in 2018 was his best since 2015 while the latter had his best season yet stat-wise.

That standout season for Ertz included the most targets, receptions, yards, first downs and contested catches he has seen since entering the league in 2013. Among all tight ends in 2018, he was the leader in targets and finished with the second-most first-down receptions.

Let’s not forget about Goedert, either. He ranked second among tight ends with at least 40 targets in passer rating when targeted (114.0). Not to mention, he was stellar on contested throws where he caught 54.5% of his targets (8th). A refined skillset like that after just one year in the NFL? Not bad.