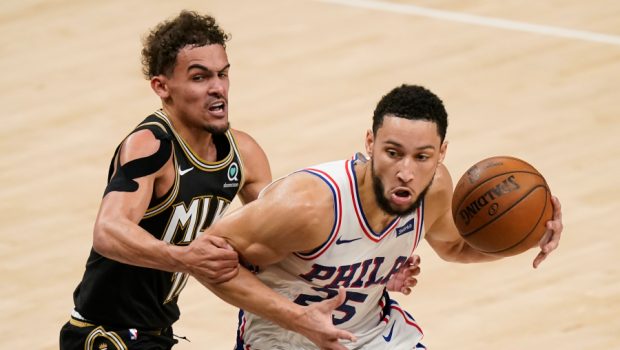 SIXERS BEN A NO SHOW ON O: I COULD’VE BEEN MORE AGGRESSIVE!

So, Ben Simmons had another no-show night in the Sixers 103-100 loss at Atlanta in game 4.

He finished with 11 points on 10 shots, but he took just one shot in the second half which came in the third quarter.

When he did touch the ball, he appeared eager to get it out of his hands.

Simmons’ lack of output in the second half of Game 4 was disappointing for several reasons, but it was especially disheartening after the solid second half he had in Game 3. Over the final 24 minutes of that game, Simmons scored 14 points on six shots to help propel the Sixers to victory. Simmons’ second-half surge in Game 3 was spurred on by pep talks from Doc Rivers and Joel Embiid.

“We just thought he passed up too many opportunities. In the fast break, in the post. So we told him that we were going to come out and feature him in the post,” Rivers said after Game 3. “And he was great for us. It’s exactly what we need. With his pace and power, it was great.”

Apparently Rivers and Embiid didn’t deliver similar messages at halftime of Game 4. If they did, it certainly didn’t resonate the same way with Simmons, who acknowledged after the game that he should have been on the attack more than he was.

“I definitely should have been more aggressive and attacked more,” Simmons said. “I think the spacing was a little off this game. We didn’t get to our spacing. We weren’t as aggressive that second half.”

In a game that the Sixers lost by three, 103-100, a couple of determined drives from Simmons could have flipped things in Philadelphia’s favor. After all, there is a correlation between Simmons being relatively aggressive on the offensive end and the Sixers winning playoff games. Since he entered the league in 2016, the Sixers are 12-4 in playoff games in which Simmons attempts at least 11 field goals. Perhaps Simmons will want to keep that stat in mind moving forward for the rest of Philly’s current playoff push.