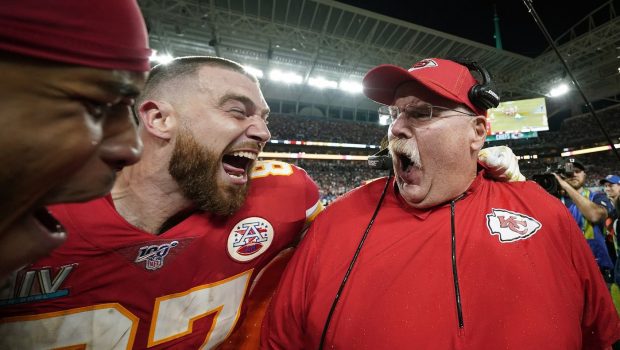 ‘I LOVED MY TIME IN PHILLY,’ AND THE WORLD LOVES ANDY REID BACK!

“I loved my time in Philadelphia,” Reid, 61, said at a news conference after leading Kansas City past San Francisco, 31-20. Mentioning the Eagles’ own Super Bowl win in 2018, five seasons after he left, Reid told reporters, “That’s a special city. … I appreciate [the continued support]. It’s humbling.”

More love for Reid from the NBA came from the Lakers’ LeBron James, who chimed in by tweeting, “Happy as hell for the big guy Andy Reid!! Congrats Coach!!!”

“Wish Andy Reid didn’t have that mustache so we could see that huge smile!” Ryan Rua, a free agent outfielder/first baseman who played for the Rangers from 2014 to 2018, tweeted. “What a coach, what a career, finally gets to lift that trophy!”

Naturally, the football world also produced its share of pro-Reid sentiment. He received congratulations from the Seahawks’ Russell Wilson and the Ravens’ Robert Griffin III, who tweeted, “Andy Reid deserved this Super Bowl.”