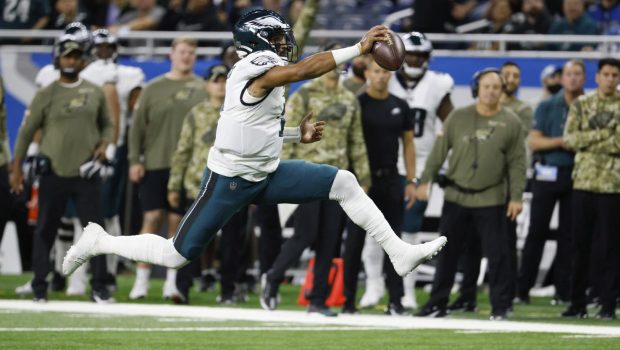 EAGLES HURTS ON LOSS TO GIANTS: ‘I FLUSHED THAT A LONG TIME AGO’!

Eagles quarterback Jalen Hurts had the worst game of his two-year career against the Giants in a 13-7 loss on Nov. 28 — three interceptions and a bum ankle.

“I flushed that a long time ago. I forgot about it,” Hurts said. “I get to play them this week.”

The Eagles (7-7) have won five of seven after opening the season losing five of season. They’re in a three-way tie with Minnesota and New Orleans for the third wild-card spot in the NFC.

The Birds may be without coach Nick Sirianni after he tested positive for COVID-19 on Wednesday. If Sirianni doesn’t clear protocols, passing game coordinator Kevin Patullo would be in charge on the sideline and offensive coordinator Shane Steichen would call plays.

“The reason that I went with Kevin there … is because Kevin doesn’t have a position to coach,” Sirianni said. “Kevin helps with a lot of different aspects throughout the game. I want there to be as little change as possible. … So, Kevin is involved in all those conversations of coin toss and going for it on fourth down, as it is anyway. So, it’s just a natural transition there for Kevin to be able to do that.”