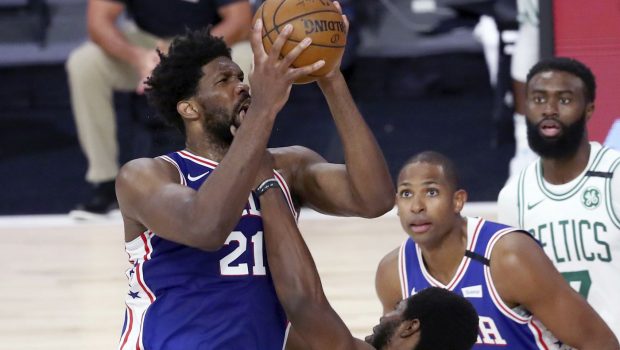 ‘I DON’T MAKE THE DECISIONS,’ SAYS SIXERS JOJO, WHO BUSTED HIS ASS!

Sixers coach Brett Brown will find out soon if he keeps his job after another terrible job of bench-coaching the Sixers, who were bounced from the playoffs yesterday, swept by the Celtics.

And star Joel Embiid had some thoughts:

“I don’t make the decisions. I’m here in Philly. Whatever happens, happens,” said Embiid, responding to a question about uncertainty with the franchise. “I’ve always said that I want to end my career here, and if it happens, good. If it doesn’t happen, well, you move on and all that stuff.”

In this series, Embiid took three fewer shots and averaged four fewer points per game than last season. He also played about three minutes fewer per game as the Sixers tried to keep him fresher.

Embiid sometimes had to make room for teammates by playing away from the basket. Specifically Ben Simmons, who thrives more on drives and in transition than playing on the perimeter. The offseason addition of Al Horford, who often flourished when playing without Embiid during the season, also crowded the field.

“I can be dominant down low, but then again, to help the team, it’s not always about me,” said Embiid, who led the 76ers with 30 points and 10 rebounds in Game 4 of this first-round series. “And with the roster we have and — if it is the same roster next year — I gotta be able to space the floor.”

Embiid, who has three years and $95 million left on his contract, said several times after the loss that he “isn’t the GM” but seemed to question some of the moves the team has made over the past two years.

“And then we, as you know, we decided to trade a lot of it with the picks and stuff for Jimmy [Butler], Tobias [Harris], and we got a bunch of great players in return. Like I said, it just didn’t happen. We could never find a rhythm this year. It is disappointing. There’s a lot of regrets. I felt like the focus was not always there. And we got to do better; we just got to look at ourselves in the mirror and just do better.”