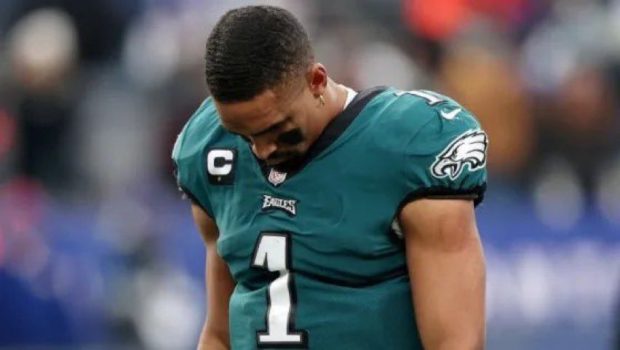 HURTS WAS TERRIBLE AND SIRIANNI SOUNDS LIKE HE WANTS HIM BACK!

Jalen Hurts had just played like a high school quarterback instead of a second-year NFL-er in yesterday’s 31-15 beatdown by the Bucs in the Wild Card playoff game.

What’s worse, his arm looked weak on passes he should have completed.

And there sat his out-to-lunch Eagles coach Nick Sirianni endorsing Hurts as the QB for next season.

“He didn’t play his best game, as we all know. But you don’t take the body of work that he had, 15 weeks, and … put everything on this game,” Sirianni said of Hurts.

“I know we’re all judged on the last game that we played, I fully get that, but I felt like Jalen grew throughout the year. And he got better as a passer, he got better reading the defense, getting the ball to the right place. He developed so much in his ability to extend plays, not only making plays with his feet but also making plays downfield on the scramble.

“I feel really good with what we have in place right here at the quarterback position. I thought he had a great year and he came a long way, and that’s what I expect of Jalen just because of the character he has, the toughness he has, the love for football he has. I can’t say enough things about Jalen the person and the player.”

In his first year as a starter, the 23-year-old Hurts completed 61.3% of his passes for 3,144 yards with 16 touchdowns to nine interceptions while leading all quarterbacks with 784 rushing yards and 10 rushing touchdowns, leading the Eagles to a 9-8 regular-season finish to secure the seventh and final playoff seed.

He suffered a high ankle sprain against the New York Giants in late November — an injury that hampered him down the stretch. He wore a walking boot on his left foot into his postgame news conference Sunday. Asked if he’ll need offseason surgery, Hurts responded, “I hope not.”

Hurts’ ankle was sore so he wore the boot postgame for comfort, the team said.

The Eagles hold three first-round picks (Nos. 15, 16 and 19) in April’s draft. The question facing the franchise is whether to use that capital to acquire a new signal-caller — by packaging the picks in a trade for an established veteran, or by selecting a prospect in this draft class — or to ride with Hurts and use those picks to bolster the talent around him.

As Hurts spoke postgame, he already had an eye toward the 2022 season.