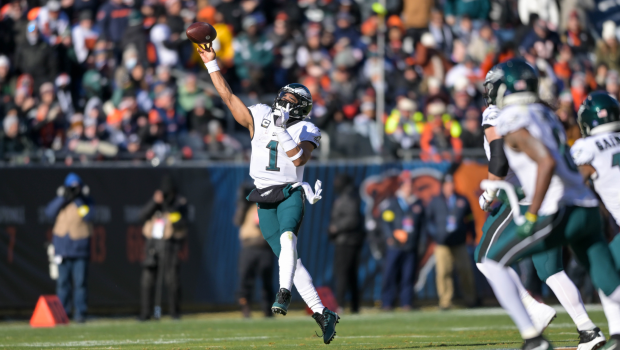 HURTS SHOULDER MAY KEEP HIM FROM PLAYING IN EAGLES-COWBOYS!

Eagles quarterback Jalen Hurts is uncertain to play Saturday against the Dallas Cowboys because of a sprained shoulder that he suffered during Sunday’s victory over the Chicago Bears.

Hurts was hurt late in the third quarter when Bears defensive end Trevis Gipson drove him into ground.

Hurts has had a breakout season while leading the Eagles to the NFL’s best record at 13-1.

He has accounted for 35 total touchdowns (22 passing, 13 rushing), passed for 3,472 yards and rushed for 747 yards in 14 games. He has had just five passes intercepted and is completing 67.3% of his pass attempts

This is the play Hurts was injured on in the third quarter.

It is not expected to be a long-term injury, per league source. pic.twitter.com/NvAxIKBOX9

Hurts finished the game and threw a 68-yard touchdown pass to A.J. Brown. His status for this weekend against the #Cowboys is in doubt, as the team wants him to be fully healthy before he returns. https://t.co/ilwy5cUKBZ