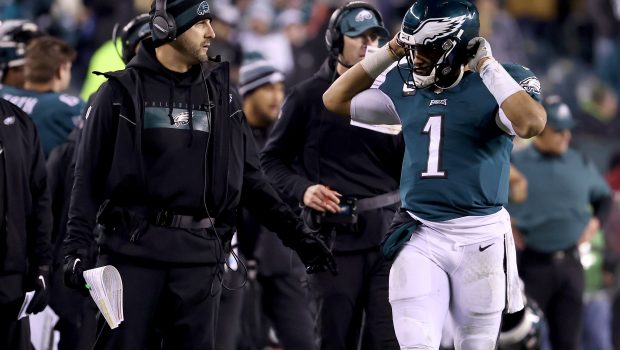 HURTS NOT RULED OUT FOR EAGLES-COWBOYS, SAYS SIRIANNI!

Sirianni called Hurts one of the “toughest” players he knows and someone who “heals fast,” so he isn’t going to put a timetable on the injury to his throwing shoulder.

There’s a chance he can play this week.”

Hurts said there is “definitely a chance” he will be able to play Saturday and he’s taking things day by day.

He nodded when asked if he’s able to throw.

Sirianni acknowledged that they will keep Hurts’ safety in mind but said the Eagles will prepare for both Hurts and Gardner Minshew to play in Saturday’s game at Dallas.

Hurts’ injury occurred at the end of the third quarter Sunday in the Eagles’ victory over the Chicago Bears when he was driven into the ground by defensive lineman Trevis Gipson following a 3-yard run. Hurts stayed on the ground for a few moments following the hit but continued playing and finished the game. He threw for 315 yards with two interceptions and ran for 61 yards and three scores in the 25-20 victory.

Hurts ran the ball a team-high 17 times Sunday. The Bears registered 13 quarterback hits on him, the third-highest total in Week 15, per ESPN Stats & Information research. His 184 QB contacts on the season are the third-most, behind only Justin Fields of the Bears (202) and Daniel Jones of the New York Giants (186).

The 13-1 Eagles need just one more win to clinch the No. 1 seed in the NFC. There’s a good chance Minshew will be the one under center against the Cowboys as the Eagles try to wrap up the division title and home-field advantage throughout the playoffs.

Hurts has had a breakout season, accounting for 35 total touchdowns (22 passing, 13 rushing) to tie Randall Cunningham’s franchise record while passing for 3,472 yards and rushing for 747 yards in 14 games. He has had just five passes intercepted and is completing 67.3% of his attempt