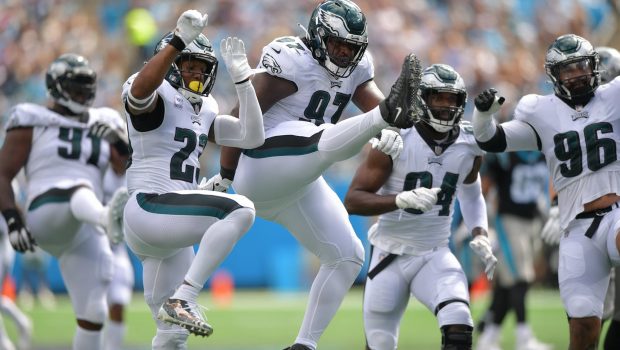 HURTS CAUGHT FIRE, BUT THIS EAGLES WIN BELONGS TO THE DEFENSE!

Jalen Hurts ran for two second-half touchdowns and the Eagles rallied from a 12-point deficit to defeat the Carolina Panthers 21-18 and snap a three-game losing streak.

Hurts caught fire in the second half.

But the game ball belongs to the Eagles defense

After T.J. Edwards blocked a Carolina punt, Hurts scored on a 6-yard run-pass option with 2:38 left to give the Eagles their first lead of the game.

Carolina’s Sam Darnold was intercepted three times, twice by Darius Slay, and sacked three times as the Panthers offense struggled against an Eagles defense that allowed 83 points and 851 yards in its previous two games.

Darnold’s effort to bring Carolina (3-2) back in the final 2 1/2 minutes ended when he was picked off by Steven Nelson along the left sideline as he threw under pressure. The Eagles, who were held to 88 yards in the first half, ran out the clock from there to hand Carolina its first loss at home.

Chuba Hubbard ran for 101 yards on 24 carries for Carolina filling in for the injured Christian McCaffrey.

DaVonta Smith had seven catches for 77 yards and a 2-point conversion for the Eagles (2-3). Hurts completed 22 of 37 passes for 198 yards and ran for 30 yards on nine carries.

Carolina’s defense had been playing lights-out for the better part of three quarters with Donte Jackson coming up with an interception and a forced fumble and Haason Reddick had two sacks.

But Carolina’s defense appeared to get worn down in the second half from spending so much time on the field.

Carolina built a 15-6 lead at halftime behind yet another dominant first-half performance at home, holding the Eagles to five first downs. That included a safety in which Jason Kelce snapped the ball over Hurts’ head into the end zone, prompting a quick game of hot potato before the ball rolled out of the back of the end zone.