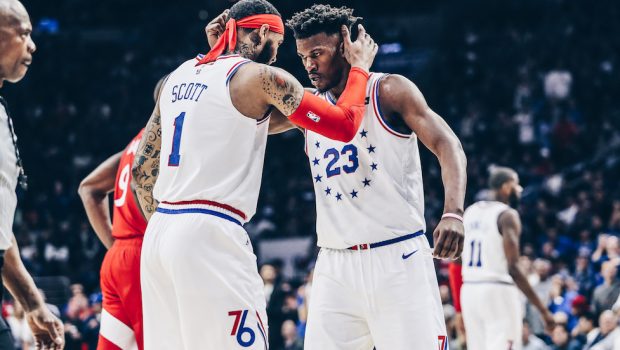 HUNGRY DOG SIXERS IN A WINNER-TAKE-ALL 7TH GAME IN TORONTO!

The Sixers took a page from the Super Bowl Eagles the other night:

Backs to the wall, and everyone writes them off as a hopeless underdog.

But they were hungry dogs.

Facing elimination in their series with the Raptors, the Sixers looked whole, and even though coach Brett Brown used a seven-man rotation, they looked deep.

The result, a 112-101 win over the Toronto Raptors, only seemed that close.

Near the end of the third quarter, Joel Embiid, beamed after making a three-pointer that expanded the lead to 22 points. When Embiid is smiling after swishes and the defense is clicking, opponents should just save some time and start revving up the charter bus outside Wells Fargo Center.

“I always say when we play like that, we’re hard to beat,” Jimmy Butler said. “At home. On the road. Neutral site.”

Embiid took it a step further.

“If we play defense like we played tonight,” he said, “we feel like we can beat anybody.”

“I’ve been fortunate to be in a few Game 7s, and they’re very unique. They’re special. They are a life lesson, a life opportunity,” Brown said. “And Jimmy sure allowed us to better achieve that.”

The 76ers, in just their second playoff run since the completion of years of tanking known as the Process, are heading to a winner-take-all showdown. A game such as that is why they gambled so much on this season.

Instead of learning how to ride the playoff roller coaster and allowing point guard Ben Simmons to develop fundamentals, such as a jump shot, without pressure to produce, the 76ers purchased a fast pass to zip to the front of the conference.

In November they traded young core players Robert Covington and Dario Saric because Butler was unhappy in Minnesota and maybe, just maybe, his six-month tryout in Philadelphia could turn into a championship. And in February they shipped two first-round draft picks and two more in the second round, as well as promising rookie Landry Shamet and two other players, to the Los Angeles Clippers because adding Tobias Harris would create the scariest starting five east of Oakland, Calif.

So far, the risks have paid off.

In these playoffs, the Raptors’ starting five leads the NBA by averaging 9.8 points more than the opposition. The 76ers rank second at 8.9. But on Thursday night, Philadelphia dominated Toronto’s first group.

Butler scored a team-best 25 points on 9-for-18 shooting to go with eight assists and six rebounds. Simmons snapped out of his disappearing act with eight points and five rebounds in the first quarter before finishing with 21 and 8. Harris grabbed nine rebounds to go with 16 points, and although Embiid reached a double-double (17 points and 12 rebounds), his impact proved more significant than his statistics. The 76ers outscored Toronto by 40 points when Embiid was in the game.

While JJ Redick’s rhythm was interrupted by fouls, he finished with 11 points to put all five starters in double figures. In contrast, four Raptors starters finished with plus/minus figures in the negative double digits.

After the rout, Embiid lumbered to the postgame dais with an ice pack over his left knee but got reenergized as he talked about the effort of his teammates.

“Everybody was great,” Embiid concluded.

Mike Scott, who came over with Harris in that February trade, gushed even more. Early on, Scott recognized that he was joining a monster.

“Ben, Tobias, JJ, Joel,” he continued. “It’s crazy, you know what I’m saying? But then you’ve got Jimmy Buckets. You can’t f— with that. That’s tough. We got to bring our side from the bench; we’ve got to hold it down. But that starting five, it’s unstoppable.”

With these moves, the 76ers pried open their championship window with the biggest crowbar they could find. Butler, whose contract has a player option, can leave in July. Harris can, too. Still, the summer seems distant — especially when Boogie Down Productions’s “Jimmy” blasts in the arena every time Butler scores and a sold-out house serenades “Jim-my But-ler!” during offensive possessions. If Thursday was the last night Philadelphia fans could chant his name, it didn’t feel like an ending. It felt like validation that a season of trades and restructuring was worth it.

Philadelphia mortgaged its future so it could show its fangs in must-win games such as Thursday’s. They rushed to get here; now the 76ers are ready for their defining playoff moment.