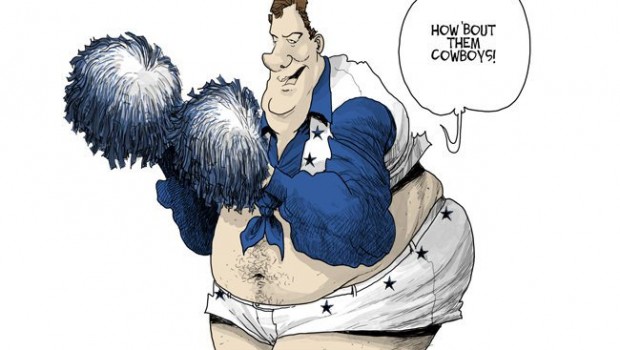 Congratulations to Jim Kenney, who won the Democratic nomination for mayor Tuesday night.

Which means he will be sworn in next January as mayor of this city that has eight times as many Democrats as Republicans.

We wish him well.

As I wrote last December:

It’s a free country and New Jersey Gov. Chris Christie can root for the Dallas Cowboys, but when he sits in Jerry Jones box and high-fives all day as the Cowboys beat the Eagles he should expect incoming.

Gov. Chris Christie, a proud Dallas Cowboys fan, sat with Jones during the Eagles’ 38-27 loss on Sunday night at Lincoln Financial Field, and the chummy relationship sparked a social media frenzy — with Eagles fans calling for Christie’s impeachment and Cowboys fans in Texas swearing allegiance to the New Jersey governor if he makes a run for the White House in 2016.

Earlier in the week, a few days before the critical NFC East showdown, former Pennsylvania Gov. Ed Rendell called Christie “pathetic” for being a Cowboys fan: “How can a Jersey guy be a Cowboys fan?” Rendell said in a radio interview. It’s pathetic.”

But Rendell’s comments were tame compared to the Twitter rant by Kenney, a Democrat, who — after watching Christie high-five with Jones during a nationally televised game that badly hurt the Eagles’ postseason chances — leveled equal helpings of disgust and personal attacks at the Republican:

Chris Christie is sitting on his very fat ass next to Jerry Jones in his box at the Linc. You suck! Kissing Texas ass for 2016! Awful!

Hey fat assed Christie, kiss Jerry Jones’ ass in his box in Dallas. Not across the river from Philly! You are just a creep!

Kenney is a life-long resident of South Philly who was first elected to the Philadelphia City Council in 1991. He is serving his sixth term in office.

Rendell said Christie’s choice of an NFL team, while “legal,” shows an “inferiority complex” and a need to be a frontrunner.

“If you are a Jerseyite or a Pennsylvanian and you’re rooting for the Cowboys, it means you’re not secure in yourself and you wanted to root for a team that was a team in your youth that was a constant winner,” he said.

He added: “Tell him I think he’s nothing but a wuss.”