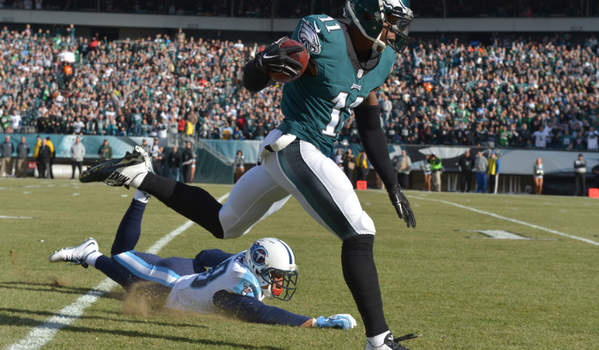 WHY ALL THE HUFFING AND PUFFING OVER EAGLE WR JOSH HUFF?

There are two memes that have developed since the Eagles’ season ended at 10-6 last December:

1. Coach and Supreme Leader Chip Kelly is in way over his head as a player personnel chief, witness Jeff McLane’s column in today’s Inky that makes the case that he has overpaid for free agents DeMarco Murray and Byron Maxwell; and

2. Kelly will always err on the side of Oregon, where he coached for four years, which helps to explain his attitude about wide receiver Josh Huff.

Some fans are Huff after a rookie campaign in which he was responsible for almost as many miscues as he was receptions (eight). With Jeremy Maclin out of the picture, however, the Eagles are inevitably looking for more from the second-year player this season.

While the mistakes stand out, Huff did flash some explosive potential. He returned a kickoff for a touchdown during a preseason game, then another during the regular season—107 yards for the longest play in franchise history, in fact. He also had an impressive 44-yard catch-and-run against the Dallas Cowboys in Week 15 that demonstrated strength and agility in the open field.

Huff is likely to see his playing time increase based on the simple fact that the Eagles are thin at wideout. Even if Jordan Matthews takes on a bigger role, Miles Austin and Riley Cooper are the only other receivers on the roster that have recorded a catch in the NFL.

The Eagles invested a third-round pick in Huff, so clearly they like him. He should understand a lot of the concepts of Philly’s offense coming from Oregon as well. It wouldn’t be surprising to see him take a big leap forward in his second year, as he’ll inevitably be awarded far more opportunities to prove his worth.