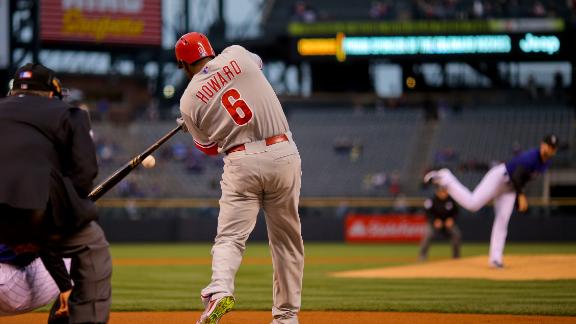 There is no getting around it.

Ryan Howard is the Biggest Piece in the Phillies 2015 lineup.

Howard had a home run among his three hits, rookie Severino Gonzalez pitched five solid innings, and the Phillies beat the Colorado Rockies 4-2 Wednesday night for their seventh win in eight games.

”I’m not really doing a whole lot different from the first month,” said Howard, who’s hitting .328 (21 for 64) with four homers and 10 RBIs in May. ”I’m just finding some real estate out there.”

That includes the towering shot he sent into the left-center field seats on a damp and chilly night at Coors Field.

”It just looks like he’s real comfortable at home plate and getting really good contact on his pitches,” Phillies manager Ryne Sandberg said. ”That ball was hit a long way tonight. With these conditions, that ball was crushed.”

Gonzalez (2-1), recalled prior to the game from Triple-A Lehigh Valley, allowed a run on five hits in his third big league start. Jonathan Papelbon pitched a perfect ninth for his 11th save in 11 chances.

”This was a good outing, for himself and also giving us a lift,” Sandberg said.

The Phillies took a 2-0 lead at the outset against Eddie Butler (2-5), who labored to get through a 43-pitch first inning. He had a chance to escape unscathed but with two on and two outs, he short-hopped a throw to first on Maikel Franco’s comebacker for an error, allowing Howard to score from third. Jeff Francouer followed with an RBI single.

Butler, coming off the shortest outing of his career in which he went 2 2-3 innings in a 6-4 loss to the Dodgers last week, did little better against the Phillies in losing his fourth straight. He went three innings and gave up six hits and four runs, including Howard’s leadoff shot in the third for his eighth home run of the season.

”I didn’t feel like it was that bad of a pitch,” Butler said. ”It was middle away, a couple of inches above the knees. That was the only problem with it. If that pitch is 3 inches farther down it’s probably a chopped ball in the infield.”

Howard also doubled in the seventh to finish a triple shy of the cycle.

Gonzalez retired the first nine Rockies he faced before Charlie Blackmon singed to start the fourth. After Blackmon stole second, he scored on Carlos Gonzalez’s single.

A couple of base-running mistakes also figured in the Rockies’ loss. Wilin Rosario was thrown out to end the fourth trying to stretch a single to a double, and in the fifth, Ben Paulsen was doubled off first after Odubel Herrera made a running catch ofNick Hundley’s drive to center.