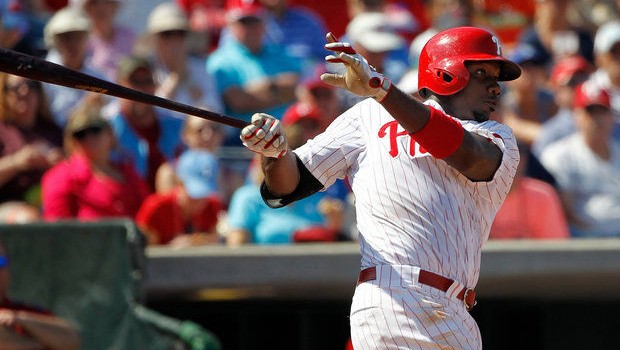 HOWARD GOES 2-FOR-2 AS PHILLIES TIE; CAN WE TRADE HIM NOW?

So, Ryan Howard singled in his first two at-bats today against the Yankees, who tied the Phillies 5-5 in their spring training opener.

There are ties in baseball? What is this, the NHL?

Can we trade Howard now?

Trying to regain the form that made him one of MLB’s top power hitters before he tore his left Achilles tendon injury in the last at-bat of the 2011 NLDS, Howard hit an opposite-field single to left in the second inning and lined a single to right in the fourth.

He’s standing up straighter at the plate and dropping his hands.

“Looked at some old video and stuff,” he said. “Back in ’06, I was way down and then it looked like I was steadily creeping up over the years.”

Howard lost 15-20 pounds since November, when he started on a diet to eliminate sugars. His listed weight had been 250.

“You have a cheat day or whatever every once in a while,” he said, “but for the most part, just trying to stick with it.”

The Yankees’ Aaron Judge, a 2013 first-round draft pick, hit a tying, three-run homer on a 3-2 pitch with two outs in a four-run ninth off Mario Hollands.