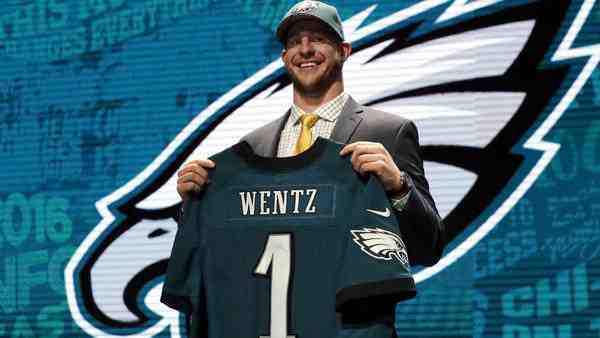 HOW WILL EAGLES QB WENTZ HANDLE THE GLARE OF LIFE IN PHILLY?

The Eagles, with Carson Wentz, at least are starting out with a clean slate under new coach Doug Pederson. As a former backup quarterback in the NFL, Pederson ought to be good for Wentz, but one thing no one can predict is how a kid who grew up and played college football in North Dakota will react to the glare of life in Philly, arguably the NFL’s harshest media market. You want patience? Philly doesn’t seem like the place to find it.

Memo to Eagles fans who hope that drafting quarterback Carson Wentz is a ticket to the Super Bowl:

History says, “not so fast!”

For the seventh time in the Super Bowl era — and the third time in five years — the first two players chosen in the NFL Draft were quarterbacks. Feel free to start the office pool now on which one of them will fail because, almost surely, one or both of them will.

This has nothing, well, almost nothing, to do with either Jared Goff or Carson Wentz and everything to do with the weight of history, expectations and the teams that chose them.

It is too soon to make a definitive judgment on last year’s top two, Jameis Winston andMarcus Mariota, but in the previous cases of quarterbacks drafted 1-2, only once did both of them succeed, and that was 45 years ago, back in a kinder, gentler, non-Twitter, non-ESPN world when teams — and fans — had a lot more patience.

They were Jim Plunkett and Archie Manning.

Since then, these were the 1-2 quarterback drafts before last year: Drew Bledsoe-Rick Mirer (1993), Peyton Manning-Ryan Leaf (1998), Tim Couch-Donovan McNabb (1999), Andrew Luck-Robert Griffin III (2012). (Yeah, you can argue Griffin has not fully failed yet, but his original team gave up on him and he is starting over in that NFL quarterback graveyard known as Cleveland.)

It is not the only reason, of course, but as long-time former NFL GM Ernie Accorsi once explained, in days of yore, a team could lose a game, slink back home, make a few perfunctory comments to the local media, then go about its business of trying to improve without the glare of a national microscope and all of today’s accompanying media criticism.

Now, one defeat is a major issue. Two constitute an emergency. Three is a catastrophe. In today’s world, do you think Terry Bradshaw would have been allowed five years to develop into a future Hall of Fame quarterback? Would a late, late draft pick like Bart Starr even have gotten a chance? Could the Giants have waited out Phil Simms’ injuries? Could the Cowboys have the patience for Roger Staubach to finish his Navy commitment?

It takes a certain mentality and a strong skin for a young quarterback to survive the slings and arrows, keep his head down and his head up at the same time, and survive both the developmental process and, probably, a coach who is more worried about his own immediate survival than the team’s future.

The NFL’s difficulty in developing young quarterbacks, even those drafted high, directly is tied to the league’s lack of patience with coaches trying to build a program. Consider the cases of those quarterbacks drafted 1-2, which occurred four times, between 1993 and 2012: Five of the eight coaches involved in those selections were gone by the end of the quarterback’s second year.

Which makes the current case of Jeff Fisher and the once-again Los Angeles Rams so unusual.

Six years ago, Fisher chose Sam Bradford with the first pick in the draft. Bradford hasn’t been a bad player, but he has been beset by injuries. Fisher traded him to Philly (which Thursday selected Wentz as Bradford’s successor, timing TBA) and installed Nick Foles as the Rams’ quarterback. That didn’t work out so well, so Case Keenum became the starter. Now, obviously, it soon will be Goff.

In a nutshell, there is the beauty — and the curse — of the draft. The Rams and Eagles both gave up on the same two quarterbacks, so now they start over. And the Cowboys, a year after a ridiculous miscalculation letting NFL rushing champion DeMarco Murray walk, will try to replace him with Ezekiel Elliott.

As for the top pick, it would be unfair to pick on Fisher, although few NFL coaches survive as long as he has (21 years as a head coach) without winning a Super Bowl. Few? How about two? Dan Reeves was a head coach for 23 years, Chuck Knox 22, and neither won a league championship.

However, while Fisher unquestionably was caught in a couple of unique situations, like theTitans moving from Houston to Memphis to Nashville and now the Rams from St. Louis to Los Angeles, he has considerably fewer playoff appearances (six) on his resume than Reeves (nine, including four Super Bowls) or Knox (11). Just a guess, but odds are that this will be the last time he gets to make the first pick in the draft.

The Eagles, with Wentz, at least are starting out with a clean slate under new coach Doug Pederson. As a former backup quarterback in the NFL, Pederson ought to be good for Wentz, but one thing no one can predict is how a kid who grew up and played college football in North Dakota will react to the glare of life in Philly, arguably the NFL’s harshest media market. You want patience? Philly doesn’t seem like the place to find it.