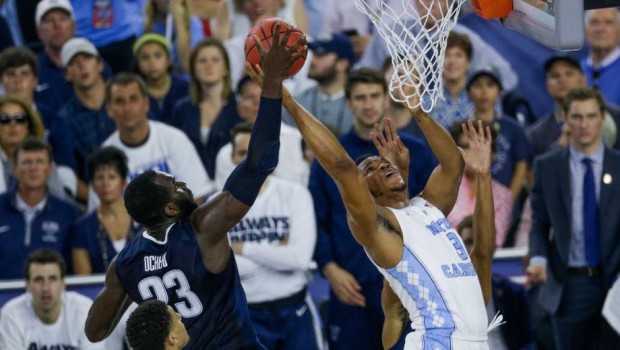 VILLANOVA’S INSIDE DEFENSE TURNED UNC’S GAME PLAN ON ITS HEAD!

Before last night’s Villanova-North Carolina NCAA title game, the conventional wisdom was that the Tar Hells’ inside strength and power would more than make up for their mediocre outside shooting.

So much for the conventional wisdom, which is rarely right!

North Carolina, a team ranked 290th nationally in three-point shooting percentage coming into its final game, made 11-for-17 from the three-point line including senior Marcus Paige’s hanging, double-clutch shot with 4.7 seconds remaining to tie the game before Kris Jenkins’ buzzer beater to win it.

In the end, the Tar Heels lost because they struggled to generate other offense besides the three-pointer, which isn’t their game.

North Carolina went 7-for-9 in the first half as it built a 39-34 lead. But the second half turned into a horror show for the Tar Heels, who hit their final three from distance to tie the game but saw the offense they wanted to run collapse as Villanova completely turned the momentum with a 19-5 run.

From the 17-minute mark of the second half until Isaiah Hicks’ jumper with 9:35 left, the Tar Heels went 1-for-10 from the field with three turnovers and looked completely rattled as Villanova collapsed the interior and forced rushed shots at the rim.

Perhaps it wasn’t a surprise that North Carolina’s shooting cooled off. This is a team, after all, that started 0-for-13 from the arc in the semifinals against Syracuse before hitting a pair of threes to stop the momentum.

The start Monday was a complete reversal.

Not only was North Carolina’s first bucket of the game a 3-pointer from point guard Marcus Paige — who slumped badly at points this season — it turned the first half around with a blazing stretch of 97 seconds in which Justin Jackson, Paige and Joel Berry all nailed threes from the exact same spot in the left corner, right in front of Villanova’s bench. That quickly erased the Wildcats’ early 19-14 lead and gave North Carolina momentum it took all the way to halftime for a 39-34 lead.

What became apparent as the second half started, however, is that the threes weren’t a luxury for North Carolina, as they often were during this season. Against Villanova, they would be a necessity as the Tar Heels made just seven of their first 26 shots of the half and found themselves in a 10-point hole.

It’s not that North Carolina didn’t try to get the ball inside; it’s that it couldn’t, at least with any regularity.

With 3:40 remaining, Berry hit another three to bring the Tar Heels back within 67-64 and Paige hit two more down the stretch. But it wasn’t enough.