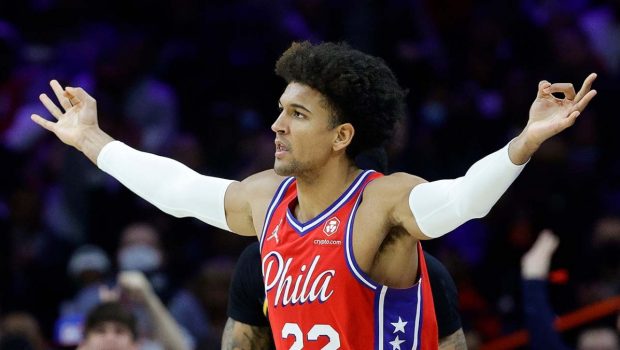 HOW UNVAXXED THYBULLE’S SELFISHNESS COULD KILL THE SIXERS!

The Sixers are in Toronto tonight to play the Raps in what may be an important game for playoff seeding.

The Sixers are in Canada, but their selfish defensive specialist Matisse Thybulle is not.

Because, it must be assumed, he is unvaccinated against COVID.

Which means he cannot enter our neighbor to the north.

The Sixers are 49-30, with three games remaining, and if they stay in the 4th spot in the East they will play the Raps, who are in the 5th spot at 46-33, in the first round of the playoffs.

Which means Thybulle will not be available for any of the games in Toronto, as many as three.

Thybulle has become one of the NBA’s best wing defenders, averaging 1.1 steals and 1.8 blocks in 25.4 minutes per game.

And he is by far the second-best defender on the Sixers after Joel Embiid.

The playoffs are set to begin April 16 and 17, with Games 3 and 4 of the first round — which would take place in Toronto — likely to be played beginning two weeks from Wednesday.