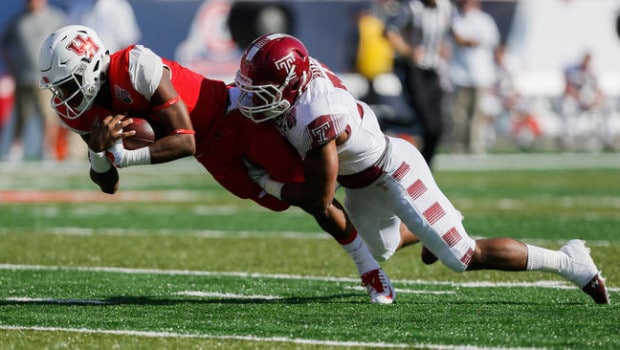 With the AAC title and a New Year’s Day bowl game on the line, Temple’s offense fell short against Houston on Saturday.

Houston is known for its high-powered offense, but in Saturday’s AAC title game against Temple, it was the Cougars’ defense that stole the show.

The Cougars gave up their fair share of yards to the Owls, but they always hunkered down when it mattered most. In a 24-13 win, Houston forced two Temple turnovers, but also stopped the Owls on fourth down three times – all in Houston territory.

Houston set the tone on both sides of the ball early in the game.

Tyus Bowser intercepted Temple quarterback P.J. Walker on the first drive of the game, setting up a short Cougars scoring drive which was capped off by a Javin Webb touchdown run.

It looked like Temple would be able to regain its footing offensively on its next drive, but Robby Anderson fumbled following a reception deep in Houston territory.

And while the Temple offense continued to sputter throughout the rest of the first half, Houston added to its lead via a 24-yard Ty Cummings field goal and a 47-yard touchdown scamper from Ward.

Temple did get on the board on a 40-yard field goal from Austin Jones, but Houston comfortably led 17-3 at halftime.

The second half was more of the same.

Temple turned it over on downs on its first drive of the second half and Houston responded with a seven-play, 71-yard scoring drive to extend the lead to 24-3 on another Ward touchdown run.

The Owls showed some fight on their next drive, however. Walker, who threw for 287 yards, found some success through the air and found Anderson for a 13-yard score, cutting Houston’s lead to 24-10 with 2:26 left in the third.

Temple forced a three-and-out on Houston’s ensuing possession and appeared to seize momentum. Another Jones field goal cut the lead to 24-13 early in the fourth, but the Houston defense stiffened the rest of the way.

The Cougars are now 12-1 in their first season under Tom Herman, who came aboard after helping Ohio State win the national title as offensive coordinator. He has brought that winning mindset to the program, and his players have certainly responded.

The win clinches the first conference championship for the program since 2006, when the Cougars were still members of Conference USA. Now a berth in a New Year’s Six bowl game as the Group of Five representative seems like a lock.