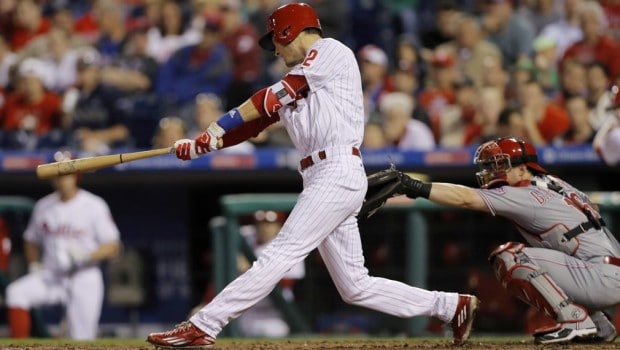 Well, bunting four times — three for hits, the other for the winning run — helped the Phillies beat the Cincinnati Reds, 3-2, last night at Citizens Bank Park.

“It’s fun to win those games because it teaches them how to win those close games,” Mackanin said. “That’s a real bonus for us.”

With the game tied, 2-2, in the bottom of the fourth inning and Tyler Goeddel (above) standing on third base with one out, starting pitcher Jeremy Hellickson joined the bunt parade. He placed one right inside the chalk along the first-base line. It died in the dirt, forcing Reds catcher Tucker Barnhart to play the ball and leave home plate uncovered.

Goeddel scampered home for the go-ahead run. The play