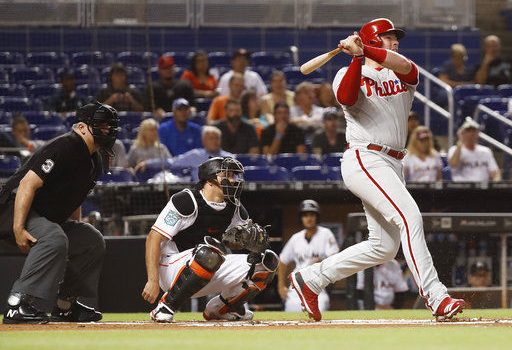 HOW THE PHILLIES BLEW A CHANCE TO CUT BRAVES LEAD TO 2!

“I think at the end of the day, if we take care of what we need to do — if we play the way that we can — we’re going to be right where we need to be regardless of what they’re doing,” Phillies left fielder Rhys Hoskins said. “Yeah, obviously, we were watching the game. But I think we’re focused on what we need to do on the field to come away with a win each night.”

The Phillies have not won a series in a month.

And yesterday, as the Braves were blowing a 7-1 lead to lose in Boston, they also blew a game that could have cut Atlanta’s lead in the NL East to two games.

And young Mr. Hoskins may be right about “the end of the day” and all that arglebargle.

The Phillies are choking away a real chance to make the playoffs for the first time since 2011, and yesterday was a prime example:

Phillies manager Gabe Kapler started Carlos Santana at third base for the first time since May 22, 2014, so he could play Justin Bour (above) at first base.

He started Asdrubal Cabrera at shortstop. It was the team’s best offensive lineup against Marlins rookie Sandy Alcantara, albeit with Jorge Alfarostarting over Wilson Ramos.

But the Phillies had just two hits and trailed 2-0 after four innings, so Kapler pinch-hit for Nick Pivetta in the fifth. Roman Quinn walked to start the eighth, but he got doubled up on Santana’s soft line drive to Marlins second baseman Starlin Castro.

“I know I’m supposed to freeze on a line drive,” Quinn said. “I took a step forward when I should’ve taken a step back. It’s just bad baserunning on my part.”

Pinch-hitter Jose Bautista followed with a double. He later scored on Cabrera’s single, but Hoskins struck out swinging to end the inning. Hoskins is hitting .170 with five homers, 12 RBIs and a .618 OPS in 30 games since Aug. 4. He has been streaky this year. He had an incredible April but struggled in May. Hoskins rebounded with a strong June and July only to be stuck in his current slump.

“I think what separates the good from the great is consistency,” Hoskins said. “And consistency, I think, is learned. It comes with experience. Not that I’m making an excuse at all, I just think the more experience you have, the more you learn how to get yourself out of ruts when you find yourself in a rut.”

“I don’t know. I don’t know what it is,” Hoskins said about their struggles against the Marlins. “Sometimes you can’t really put your finger on that. Sometimes it’s just a year-to-year thing. For whatever reason this year, we haven’t been able to put them away when we’ve had the opportunity.”