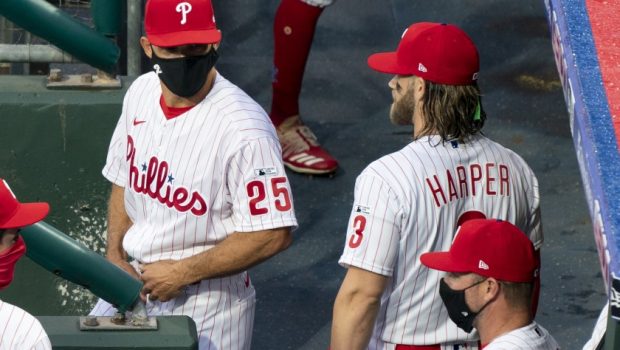 HOW THE PHILLIES ARE ADAPTING TO THE NEW NORMAL!

Thanks to the recent health crisis and much like many other sports, Major League Baseball has been dramatically affected in terms of games, playoffs and fan interactions.

The good news is that things may soon be returning to what the majority of experts have dubbed the “new normal”.

While the 2020 MLB baseball season has yet to be fully salvaged, players will be quite happy that they are allowed to once again return to the diamond.

However, a number of challenges still exist. Similar to other teams, the Philles will have to cope with training restrictions if they hope to be able to compete in the near future.

What are some of the changes which have been implemented and how might these impact the players themselves?

We should first highlight the fact that the current restrictions are not all smoke and mirrors.

After two COVID-19 outbreaks (the Marlins and the Cardinals) during training sessions, Commissioner Rob Manfred is leaving nothing to chance. This is why even more restrictive measures have now been put into place.

Examples include mandatory face masks while in dugouts and limits in regards to how many teammates can travel together. Of course, the main goal is to mitigate the chances that any infection may spread and cause yet another halt to MLB as a whole. When we then recall that a Phillies employee tested positive in recent weeks, it becomes clear that these measures are necessary at the moment.

While games such as online pokies NZ will not require players to come into physical contact with one another, baseball is a decidedly hands-on sport.

Thus, training sessions have been far from normal. Tagging runners, spitting, wiping one’s face, and even coughing are now frowned upon. There is no doubt that such measures have caused some players to adjust their attitudes.

In the same respect, Phillies trainers have been forced to adopt a handful of novel protocols in order to ensure that the team is ready for the autumn season. So, could levels of performance be affected?

This is a difficult question to answer. First and foremost, we have never witnessed such a situation before. Another point to highlight is the fact that all teams haven been forced to adopt similar measures. In other words, the Phillies are no better or worse off than their competitors. It is hoped that this will provide a level (albeit disrupted) playing field throughout the remainder of the year.

Of course, fans and players alike are eager to put the 2020 season behind them so they can focus on what 2021 might have in store.

Still, there is no doubt that the Phillies will adapt to the current situation and make the most out of what can only be called challenging times. If nothing else, we can rejoice in the fact that games are once again taking place; even if attendance is limited.