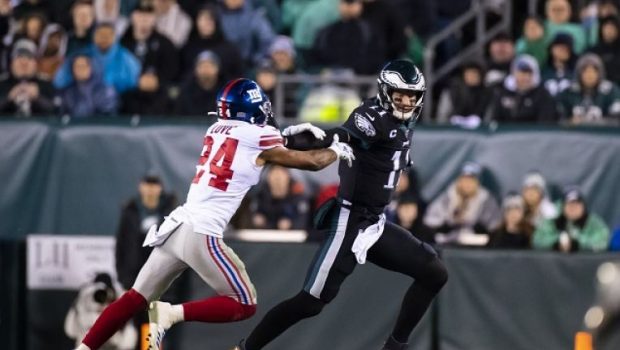 HOW THE EAGLES WOKE UP JUST IN TIME TO BEAT WOEFUL GIANTS!

It ended in a blur of sudden competence from the hated Eagles, the wretched Eagles, the bleepin’ Eagles, who’d spent so much of the game’s first 45 minutes looking like they’d rather be anyplace other than Lincoln Financial Field, sloshing about in the rain.

And in a that sudden rush of competence, the Eagles handed the Giants a ninth straight loss — tying a 43-year-old record of New York futility.

In that sudden rush of competence, the Eagles kept Eli Manning on the sideline, kept the Hollywood ending locked in a trunk, sending the Giants back up the Turnpike with a 23-17 overtime loss that brings them one step closer to a merciful end of the season and one step closer to Chase Young.

“When you lose like this and you lose in a tough, competitive games like this it’s hard,” Giants coach Pat Shurmur said.

“It’s different when you get blown out, but our guys fought really hard. They did a good job of beating us in the end. We have to fight through it and do the very best we can to keep going.”