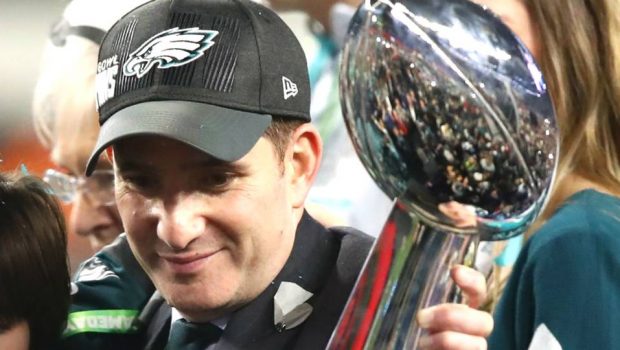 HOW EAGLES ESCAPED MEDIOCRITY AND BECAME SUPER IN TWO YEARS!

Jan. 2, 2015: The Eagles “promote” Howie Roseman in lieu of firing their general manager.

What happened next: Chip Kelly demonstrates the Peter Principle.

Lots of NFL teams go through power struggles. Most times, the guy who loses the battle has to find a new organization.

That wasn’t really the case in Philly when Kelly consolidated power after his second consecutive 10-6 season. After GM Roseman fired vice president of player personnel Tom Gamble, Kelly won the ensuing battle for personnel control and shunted aside Roseman. Amid rumors that the deposed executive talked to the Jets about their vacancy at GM, Roseman was handed a contract extension to stick around as executive vice president of football operations, but he was essentially banned from the front office. Kelly took over as general manager and proceeded to rebuild the roster in his image.

That didn’t go well. The Eagles traded Nick Foles as part of a package for Sam Bradford, shipped LeSean McCoy to the Bills, signed DeMarco Murray and Byron Maxwell to big-money contracts, cut veteran offensive linemen Evan Mathis and Todd Herremans, and got little from a draft class highlighted by Nelson Agholor and Eric Rowe. The Eagles went 6-9 before firing Kelly and restoring personnel control back to Roseman.

Roseman moved on from most of Kelly’s mistakes, traded up for Carson Wentz, signed Foles and hired Doug Pederson. Two years later, the Eagles were Super Bowl champions. Had the Eagles fired Roseman or encouraged him to find new employment, their rebuild probably wouldn’t have gone as smoothly.

Aug. 3, 2016: Foles decides against retiring and signs with the Chiefs.

What happened next: Foles goes on a special run in Philly.

You’re probably familiar with this last one, given that it was widely reported last February. Foles told the media that he had considered retiring after being cut by the Rams in 2016, spending a week debating his options with his wife and going fly-fishing with his brother-in-law. When Foles came back and prayed on the matter, he decided to return to football and insisted on playing for former coach Andy Reid.

The story sort of breaks down there. Foles spent one year as the backup in Kansas City behind Alex Smith before signing a two-year, $11 million deal with the Eagles to play under former Chiefs offensive coordinator Doug Pederson. He won the Super Bowl in Year 1 and just pocketed a $1 million bonus after Cody Parkey’s potential winning field goal attempt was partially blocked by Treyvon Hester in Chicago. He’ll probably be franchised after the season and traded for a draft pick, although it seems likely that the playoff hero won’t be suiting up for Reid with the Chiefs.

Would Foles actually have retired? It’s tough to say. Twenty-seven-year-old quarterbacks with NFL-caliber skills generally don’t retire, but spending a season under Jeff Fisher can take a lot out of a man. Foles also had pocketed a $6 million roster bonus for the 2016 season before being released and had made more than $15 million over his pro career, so the Arizona product wasn’t strapped for cash. I think Foles probably would have made his way back to the NFL one way or another, but the path he took sent him to Super Bowl glory via Philly’s former coach and that coach’s protege: