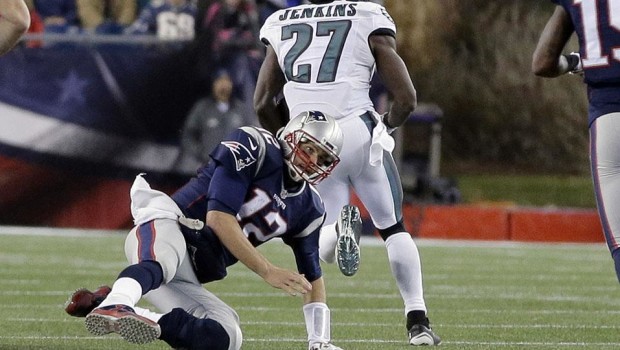 HOW THE EAGLES BEAT THE PATRIOTS AND SAVED THEIR SEASON!

With two terrible blowout losses and a three-game losing streak to shake off, the Eagles did what most thought to be impossible — beat the Patriots on their home field 35-28.

They not only won and crept into a tie for NFC East lead (thanks to the Cowboys win over the Redskins Monday night) with a 5-7 record, but beat the great Tom Brady for the first time ever!

In fact, it was the first victory over NE since 1999, first in Foxborough Mass. since 1987, how did it happen?

They harassed Tom Brady for 4 sacks, numerous hurries, made him way uncomfortable in the pocket all day long, forced Brady into two interceptions, one returned by Eagles safety Malcolm Jenkins to the house for a 99 yard TD return!

It was also helpful that All Pro tight end Rob Gronkowski sat out the game with a banged up knee he hurt the week before in a loss to the Broncos. But injuries are part of the NFL equation, especially in December when all teams are banged up.

No one felt sorry for the Eagles when Sam Bradford and Ryan Mathews sat out and lost big — no one feels sorry for the Pats either.

The Birds were desperate to win a football game they needed badly, and they produced a rare feat in scoring two special teams TD’s:

Sproles on an 83-yard punt return, plus a blocked punt by Chris Maragos that Najee Goode scooped up and ran into the end zone from 38 yards out.

Goode told reporters that team owner Jeffrey Lurie “fired up” the locker room before a 35-28 win over New England, saying: “He had a fire under his ass, and it lit a fire under our ass.”

They shuffled their running back rotation with DeMarco Murray gettinging fewer carries in key situations. Kelly said in his day-after news conference “that’s how the game expressed itself”. When questioned further by Howard “Burger King” Eskin, Kelly shot back, “I don’t know how much differently I can explain it to you”.

The Buffalo Bills will visit the Linc next Sunday with Shady McCoy facing the Eagles for the first time since being traded, December 14th, 1pm/CBS.