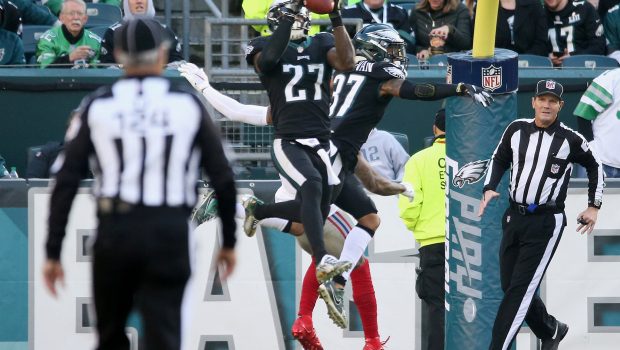 HOW THE EAGLES BEAT THE GIANTS AND LIVED TO PLAY MONDAY NIGHT!

With the New York Giants driving for another score at the tail end of the first half, Eagles safety Malcolm Jenkins made a huge interception (above), breathing life into the Birds and probably saving the season.

The Eagles made a new commitment to the running game behind RB Josh Adams’ 84 yards on 22 carries, and they squeaked by the Giants 25-22, vaulting them right back into the weak NFC East playoff dash.

The Birds’ offensive line showed signs of its past stellar play, opening holes for Adams, the rookie running back from Warrington Township in Bucks County, and Carson Wentz was able to stay clean long enough to throw for 236 yards with one TD strike to Zach Ertz.

The return of DT Tim Jernigan gave the Eagles a much-needed reinforcement on the D-line that’s been lacking in the past five games!

The Giants were practically shut down in the second half, scoring only on a field goal.

Strangely, after All-World rookie running back Saquon Barkley tore up the Birds for 90 plus yards in the first half, and a TD, first year head coach Pat Shurmur decided not to use the explosive Barkley in the 2nd half, toting the rock 4 times for 7 yards!

The Eagles will take it of course, but Shurmur opened himself up to massive criticism which he richly deserved for the dumb move keeping Barkley on the bench in the second half.

With the big win, the Eagles are amazingly still “in the hunt” for the NFC East crown as the welcome their bitter rivals from the south, the Washington Redskins, to the Linc next Monday night, December 3rd, 8:15pm/ESPN.