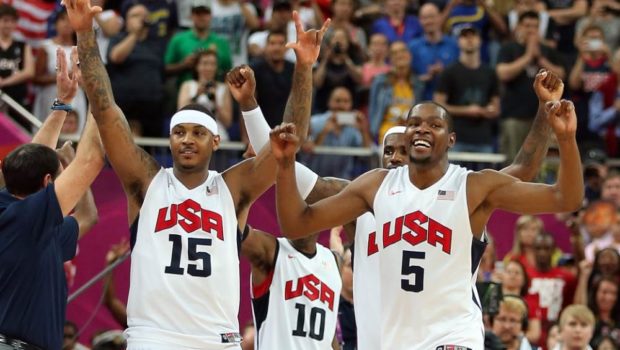 Things looked bleak for the U. S. men’s basketball team at the Rio Olympics.

Sure, they had gotten to 4-0 but had three too-close-for-comfort games against no-hopers.

Then came practice last Tuesday — the first time they had a full contact session in nearly three weeks.

For the modern-day NBA stars who want so badly to preserve the Team USA legacy, and who know full well how infamy of a different kind will haunt them if they don’t win the gold medal today against Serbia, the chance to beat up on the best — themselves — served as a poignant reminder.

“We’re not going to see better athletes than playing against each other, so we really got after it; we picked it up,” Team USA/Indiana Pacers small forward Paul George said.

“We hadn’t had a contact practice in a long time, since we left Chicago (after a July 29 exhibition game). … We hadn’t been the same since we’ve been going live against each other. So it was good. It was good to kind of get everything out, go up against each other, get after each other a little bit today. It should pan out for us.”

Since then, they turned in a blowout win against Argentina’s decorated group (105-78) and took out a Spain team that has been considered the second-best on the planet for so many years (82-76). Since then, they’re playing with the kind of fire and focus that was lacking in those near-disaster games. Since then, they look much more like a team that truly understands what it will take to avoid an international hoops disaster.

“I think that (practice) helped us,” said coach Mike Krzyzewski, the Duke legend who took over the national team in 2005, is 58-1 since (including 51 consecutive wins; 23 in the Olympics) and will retire as national team coach after this game.

Strange as it may sound, Team USA doesn’t spend much time in fifth gear during the Olympics. With all of these NBA players having endured seasons that spanned anywhere from seven to nine months, there’s a concerted effort to minimize the wear and tear that comes with volunteering to play for the national team. In these Olympics, three planned practices on non-game days — including Saturday’s — were downgraded to more informal session (optional workouts with video sessions and/or a team meeting).

But it’s a fine line to walk. Take it too easy in practices, and that mentality just might bleed into a game. What’s more, the reality is that this version of the Team USA men’s squad has a much smaller margin for error than its predecessors.

Much like the Tuesday practice that stoked their collective fire, the Aug. 12 win against Serbia should make it easy to remember what it will take to win gold.

“Serbia came within a whisker of beating us in our pool play, so we absolutely respect them,” Krzyzewski said. “We know how good they are. They’re so well coached, Sasha (Djordjevic) does an amazing job with them. They have great camaraderie; they’re an outstanding passing team; an outstanding defensive team as was shown in the Australia game (an 87-61 win in the semifinal); and they’re led by one of the all-time great players internationally in (Milos) Teodosic. So they’ll be very, v