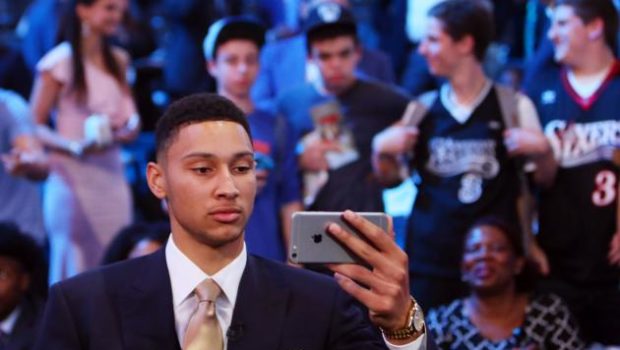 Regardless of whether it was Sam Hinkie or Bryan Colangelo making the first pick, the Sixers were always going to take Ben Simmons (above) at No. 1.

While Brandon Ingram may have been a better fit with the rest of their young core, Simmons’s combination of speed, size, and skill as a 6-10 point forward is too tempting for any GM to pass up.

That was the easy part.

How Colangelo was going to be graded on his performance, especially in comparison to Hinkie’s past wheeling and dealing, was what he would do with Philly’s other assets. Would he flip Nos. 24 and 26 for veterans in an effort to win now, reach for the biggest names left on the board, or make picks that would satisfy the Hinkie devotees?

He managed to accomplish the latter two. Colangelo went with Timothe Luwawu of France at No. 24 and Furkan Korkmaz of Turkey at No. 26, two prospects who had been pegged as late lottery picks.

Luwawu is the better athlete and Korkmaz the better shooter, but both represent the type of long, athletic wings with ball skills and shooting ability you want to put around Simmons.

The goal for the Sixers with their two late first-round picks was to find running buddies for their no. 1 pick that could also function in a half-court offense and complement their bevy of bigs. The Philly GM stuck the landing.

Colangelo caught an enormous amount of grief in the aftermath of selecting Andrea Bargnani no. 1 overall in 2006, but he made his reputation in the league with his ability to pinpoint draft talent. He drafted Amar’e Stoudemire, Shawn Marion, and DeMar DeRozan, and none of them were consensus picks at the time. Hinkie had a true gift for acquiring draft picks, but his body of work in selecting prospects wasn’t all that inspiring. The Sixers might have stumbled into their best-case scenario: They might have found an alchemist to turn Hinkie’s pile of assets into real, live basketball players.