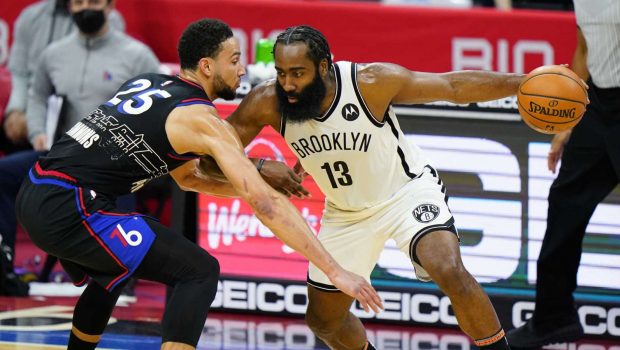 It was only 25 days ago that the Houston Rockets traded James Harden to the Brooklyn Nets after the Sixers reportedly had a done deal on a Ben Simmons-Harden swap.

Well, last night at the Wells, Simmons showed us why the Sixers should never even think about trading him.

He scores without jumpers, distributes, rebounds and plays lockdown defense.

Harden’s numbers for the Nets looked good: 26 points, 10 assists, and eight rebounds, but in the third quarter, when Simmons got serious Harden was nowhere to be found.

Coach Doc Rivers moved Simmons over to Harden, and Matisse Thybulle and Danny Green pitched in to shut Harden down.

“It was more in the third quarter, but I also thought having Ben guard him and then being able to switch the pick-and-rolls with Matisse and Danny it wasn’t just one guy,” said Rivers. “I thought that having that group on the floor at the same time, getting out on the break, getting stops I thought, just the force that we played with knowing that they played last night, as well, really helped.”

“At times a lot tonight, they went in there together to make sure that didn’t get any driving lanes,” said Embiid. “There was a few times where, actually, a lot of times where James just kept driving to the basket and basically I had to guess between contesting the shot or stay with DJ to make sure they don’t get a lob. We just got to play it safe with those types of situations, but overall, I thought we did an okay job.”

With Simmons being the primary defender on Harden and then having Thybulle and Green jumping out on switches when the Nets were trying to run a pick-and-roll, it made life miserable for the 2018 MVP. The Sixers ended the third quarter on a 23-7 run on their way to the win due to the defensive coverage on Harden.

“It makes it easier for us,” said Simmons. “I’m fine with Matisse switching on to whoever I’m going and vice versa and the same thing with Danny. We have trust in each other as perimeter defenders we’ve some of the best defenders in the league on the perimeter. I think with Danny, Matisse, and myself, I think we do pretty well, collectively, as defenders.”