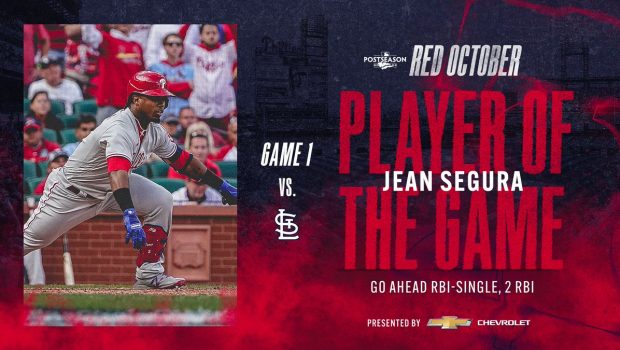 HOW SEGURA AND ELECTRIC PHILS STRUCK FOR 6 IN 9TH!

The Phillies rallied for six runs in the ninth for a 6-3 victory in the opening game of their National League wild-card series.

It was the first time in 94 postseason games that St. Louis, an 11-time World Series champion, had blown a lead of at least two runs going into the final frame, according to Sportradar.

“It’s what we do. We fight,” said Alec Bohm, who was plunked on the shoulder by Cardinals closer Ryan Helsley with the bases loaded to drive in the first run.

Asked how it felt in the dugout during the go-ahead rally, Phillies manager Rob Thomson — who replaced Joe Girardi after their poor start to the year — replied simply: “Electric.”

That’s because the Cardinals, who were 74-3 on the season when leading after eight innings, were poised to put another one away after Juan Yepez hit the first go-ahead pinch-hit homer in franchise history with two outs in the seventh.

But after struggling all afternoon against José Quintana and the St. Louis bullpen, the Phillies finally got their offense going. JT Realmuto began the decisive rally with a single off Helsley, and walks for Bryce Harper and Nick Castellanos loaded the bases before the All-Star closer plunked Bohm.

The Cardinals training staff checked on Helsley, who jammed a finger on his pitching hand earlier in the week in Pittsburgh, and he was replaced by Andre Pallante. He gave up Segura’s go-ahead single through the right side of the infield.

“It was exactly what I wanted,” Pallante said. “It just got through.”

Edmundo Sosa added another run when he brazenly scored on Bryson Stott’s grounder to first base, and Brandon Marsh drove in another run when a tough hop got past Cardinals shortstop Paul DeJong.

By the time Kyle Schwarber added a sacrifice fly, Phillies reliever Zach Eflin had plenty of wiggle room in the ninth.

It looked as if Eflin might need it, too, when Nolan Arenado and Dylan Carlson reached base and Nolan Gorman hit a two-out RBI single to right. But Eflin responded by striking longtime Cardinals star Yadier Molina to end it, leaving Philadelphia one win away from facing NL East champion Atlanta in the divisional round.

“That’s why you play 27 outs,” the Phillies’ Rhys Hoskins said. “There’s just a ton of belief in this dugout.”

There was a sentimental breeze sweeping through Busch Stadium before the game. Ozzie Smith cheerfully walked to the mound to deliver a ceremonial first pitch, and if the flag-waving Cardinals fans packed into every nook and cranny closed their eyes during introductions, they might have thought they were watching a game a generation ago.

After all, some familiar faces were in the lineup from the last time St. Louis and Philadelphia met in the playoffs.

That was 11 years ago to the day Friday, when the Cardinals beat the Phillies in a dramatic pitchers’ duel between Chris Carpenter and Roy Halladay in Game 5 of the NL divisional series. Molina and Albert Pujols played for St. Louis that night while erstwhile ace Adam Wainwright, pitching out of the bullpen this series, also was there to celebrate.

Just like that night in Philadelphia, pitching dominated most of Friday’s series opener.

Quintana, who arrived in a deadline trade from Pittsburgh, was terrific, allowing only a single to Matt Vierling and a double to Bohm while pitching into the sixth. His day was done after fanning Schwarber for the second time on his 75th pitch, handing the game over to a relief corps that had been downright dominant this season.

Zack Wheeler was the equal of Quintana, allowing a leadoff single to Lars Nootbaar and nothing else until Tommy Edman’s leadoff single in the sixth. Edman was left stranded on third when Paul Goldschmidt grounded out.

Wheeler departed after retiring Arenado to start the seventh. He struck out four and walked one on 96 pitches, his most since Aug. 20, shortly before the right-hander landed on the injured list with forearm tendinitis.

Then it came down to the bullpens, and the Phillies managed to overcome one of the best in the game.

“This is playoffs,” Goldschmidt said. “We got to try to find a way to win tomorrow. You know, we can’t worry about what happened today. And if we can win tomorrow, we’ll have a shot on Sunday.”