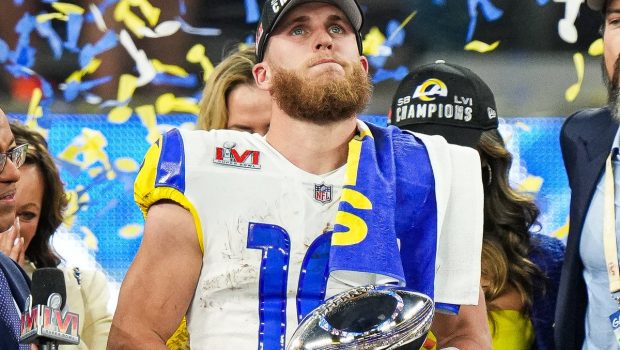 HOW RAMS WON THE SUPE: BENGALS COULDN’T CATCH UP WITH KUPP!

The Rams Cooper Kupp caught a 1-yard pass from Matthew Stafford with 1:25 remaining just in time for a 23-20 Super Bowl victory over the Bengals.

What Los Angeles did on that drive finally measured up to what its defense was doing most of the night: overwhelming Cincinnati’s blockers, sacking Joe Burrow a Super Bowl record-tying seven times. The pressure, led by Aaron Donald and Von Miller, was nonstop.

“You got to be relentless,” said Donald, who added a crowning achievement to his certain Hall of Fame career. “You want something bad enough you’ve got to go get it. You know it was right in front of us … all offseason you work, you train, you got camp, you got a long season just for this one game. You know we the last team standing.”

Standing in a venue built for champions, with the Rams (16-5) earning their first NFL title since the 1999 season — and their first representing Los Angeles since 1951.

They did so in their home, the $5 billion SoFi Stadium, making the Rams the second consecutive host to win the championship after Tampa Bay became the first a year ago.

“As far as building this stadium,” said Rams owner Stan Kroenke, the man who moved them back from St. Louis in 2016, “I think it turned out all right.”

The winning series, during which game MVP Kupp’s 4-yard touchdown reception was negated by offsetting penalties, ended soon after with the NFL Offensive Player of the Year easily beating Eli Apple in the right corner of the end zone for the winning score.

Kupp had four receptions for 39 yards, and a 7-yard run on fourth-and-1 from the Rams 30 on the championship drive.

Cincinnati (13-8) was penalized the second-fewest times (72) for the fewest yards (620) in the regular season but flags hurt badly — including pass interference on Kupp in the end zone.

“I’ve said it all year, whatever is asked of me whatever my job is gonna be, I just want to execute to the best of my abilities,” said Kupp, who won the triple crown of receiving in 2021, leading in catches, yards and touchdowns. “I trust as the game goes on I’ll have opportunities as well, and I just want to stay ready for those things stay locked in.”

As locked in as that pass rush.

Fittingly, Burrow was under pressure on fourth-and-1 and threw incomplete, setting off a football fiesta this city has not seen since the LA Raiders won the 1983 championship.

A tearful Donald said after the game, “I wanted it so bad. I dreamed this.”