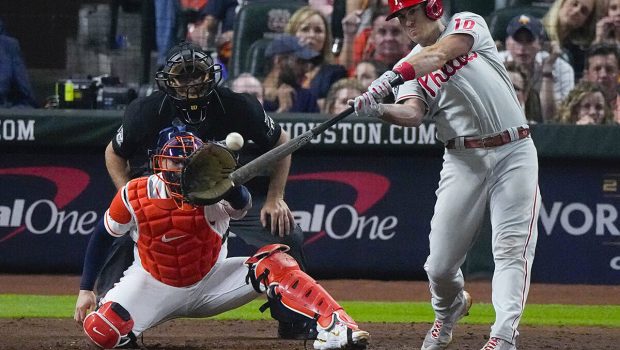 HOW PHILS JT REALMUTO CUT ASTROS DOWN TO SIZE!

J.T. Realmuto delivered a two-run double in the fifth and a go-ahead homer in the 10th as the Phillies edged the Astros 6-5 in the first game of the World Series.

Realmuto was responsible for the only runs that came after the fourth inning tonight.

His fifth-inning double completed a five-run comeback against Justin Verlander, and his opposite-field homer in the 10th was the only run charged to either team’s bullpen in 10 2/3 innings of relief work.

The Astros tried to come back in the bottom of the 10th, getting the tying run to third base against David Robertson, but Aledmys Díaz grounded out to end it.

Game 2 of the World Series will be played Saturday night in Houston. Zack Wheeler and Framber Valdez are slated to start.