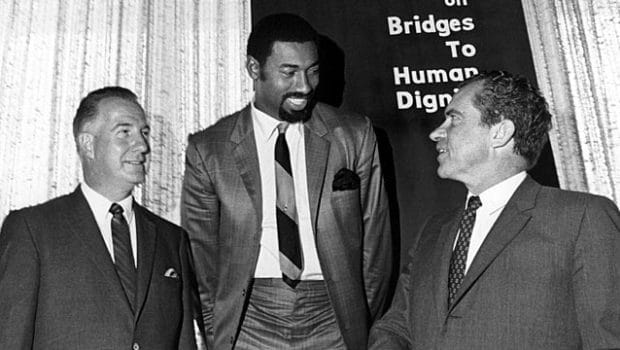 HOW PHILLY’S GREAT WILT CHAMBERLAIN WOUND UP WITH NIXON!

It was during the procession after Marin Luther King’s Atlanta funeral, with the cold reality of King’s dead body present, that made Chamberlain speak up.

“Throughout his political career, [Nixon] had been called a ‘loser’ — the guy who could never win the big one. Me too.”

“I kept asking myself, what can I do to help America — and particularly my people — reach the mountaintop and see the promised land that Dr. King so often talked about,” Chamberlain said in July 1968 to the black-owned Los Angeles Sentinel. “Something came over me at that precise moment. As I walked with thousands of others from the Ebenezer Baptist Church to his final resting place, I quietly walked up to former Vice President [Richard] Nixon, and told him I liked his program and wanted to join his team.”