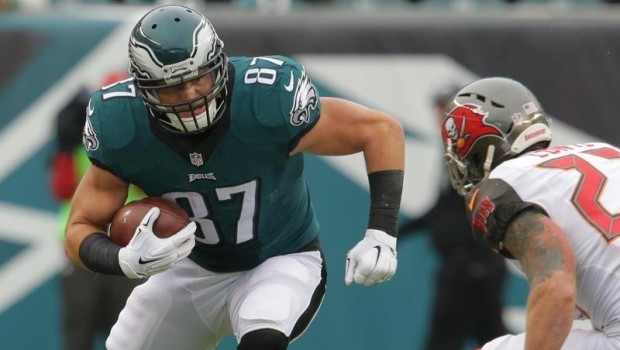 Eagles tight end Zach Ertz is out with a concussion suffered on a hellacious somersault he took last Sunday against the Bucs.

Do, the spotlight has fallen to old man Brett Celek.

When the season began, all of the hype surrounded the new additions brought in by Chip Kelly this offseason, but it has been one of the longest tenured Eagles that is making the biggest impact recently.

Celek is far from flashy and is usually well-regarded for his blocking abilities now that he is getting up their in age. But the 30-year-old shows he can still make plays if opposing teams do not respect him.

The tight end led the team with seven catches and 79 yards last week. Celek also made a big impact the week before as he gained 134 yards on just four catches against the Miami Dolphins. The last two weeks has shown a resurgence by the veteran as he caught 11 of his 18 catches this season.

Philly is utilizing more two tight end sets as the season progresses to the ineffectiveness of their wide receivers and the benefits of having more blockers on the field for the run game. Celek also provides a reliable target the quarterback due to his reliable hands. He is also dangerous in the open field as he looks to inflict pain on defensive back that wishes challenge him.

The University of Cincinnati product has always been a reliable tight end for the Birds, but his veteran leadership could be key in steading an offense amidst a two-game losing streak. With Ertz recovering from a concussions suffered in last week’s game, Celek will see more snaps and should have a bigger impact on the offense.