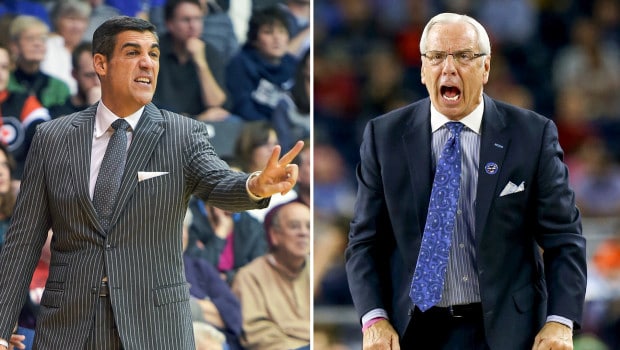 HOW NORTH CAROLINA’S DUMB-O COACH HANDED THE TITLE TO NOVA!

Did in-over-his-head North Carolina coach Roy Williams not see the 1992 East region final at the Spectrum when Christian Laettner nailed an 18-footer at the buzzer to win a game for Duke over Kentucky because:

What the hell was Williams thinking with that defensive alignment when Villanova got the ball back with 4.7 seconds left?

Williams had nobody on the inbounder. Didn’t the world learn from the Laettner shot that you have to make it difficult on the inbounder? Kris Jenkins had nobody guarding him. He easily tossed the ball in and jogged up court, caught a pass, and made the shot. You’ll be flabbergasted at how easily it was for him.

Brice Johnson, your best leaper, defended nobody on the play. Watch it again. He’s sitting back, guarding an area. There are no Villanova players there. Why wasn’t your best shot blocker, a guy with spectacular leaping ability, defending the inbounder? Maybe he gets a finger on it, maybe he steals the pass, but at the minimum, he makes it difficult for Villanova to easily move the ball up court.

Jenkins has been on an unbelievable shooting tear this postseason. UNC elected not to put a defender on him. Let that sink it.