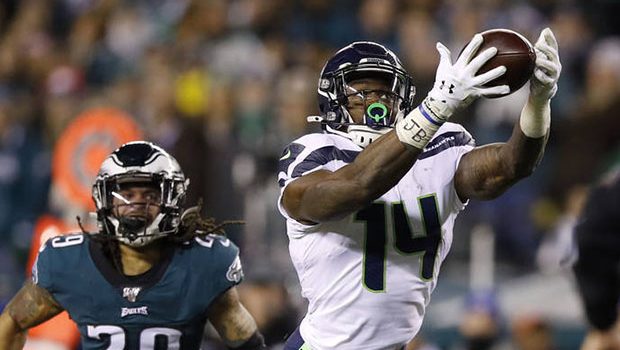 HOW MUCH BETTER WOULD EAGLES BE WITH METCALF, NOT JJ?

Okay, it’s Saturday morning and the Eagles have a bye tomorrow before taking their 3-4-1 NFC East-leading record on the road Nov. 15 at the Giants.

So, we have some time to clear our heads and wonder.

About how in the world the Eagles took J. J. Arcega-Whiteside with the 57th pick in the 2019 draft when D. K. Metcalf slid to 64, where the Seahawks snagged him.

What was the Eagles brain trust thinking?

Are were they thinking?

JJ has been a bust with the Birds:

Metcalf has taken the NFL by storm:

Metcalf’s emergence has created bewilderment among fans and forced an uncomfortable reckoning in front offices. NFL teams took 63 players — including eight wide receivers — before the Seahawks gleefully plucked Metcalf with the final pick of the second round. How could such an obvious star fall so far?

“What we were hoping we’d get, he’s everything we wanted,” said Seahawks wide receivers coach Nate Carroll, the son of head coach Pete Carroll. “He’s huge. He’s physically imposing. It’s crazy I get to work with him every day, a guy of his ability.”

That is Metcalf: a player who inspires awe even among those inured to the outlandish physical prowess of NFL players. And yet his NFL career started with an unexpected delay.

On the first night of the 2019 draft, Metcalf gathered at a table of family and friends in Nashville and waited to hear his name. He expected he would find out his new team, greet Commissioner Roger Goodell and celebrate. As the night wore on, Metcalf stayed seated, looking around as phones at other tables rang instead of his. His face remained placid. When the night ended and his name had still not been called, Metcalf stood and thanked everyone at the table for coming.

“He handled it just incredibly well,” said Chris Cutcliffe, his receivers coach at Oxford High in Mississippi, who attended the draft with Metcalf. “He really didn’t let it rattle him.”

He had to wait again the next day. In a widely seen video, Seahawks General Manager John Schneider and Pete Carroll called Metcalf, who had concealed his emotions for two days. When told he would be a Seahawk, Metcalf burst out crying. Eventually, he yelled, “Why y’all wait this long, man?”

The question lingers as one of the NFL’s great mysteries. The answer is multifaceted, partly straightforward and partly, perhaps, a function of collective overthinking.

“He is definitely one of the most overanalyzed people I’ve ever seen,” Nate Carroll said.

The overriding reason Metcalf fell is health. In the seventh game of his redshirt sophomore season, his final year at the University of Mississippi, he suffered a cervical fracture: a broken bone in his neck. His career was threatened.

Metcalf found a surgeon, Kevin Foley, who performed surgery that saved his career — “a miracle,” Metcalf called it in January. By the time of the draft, Metcalf had been fully cleared for football and had proved his fitness at the combine. Today, he said, his neck is normal and requires no extra maintenance.