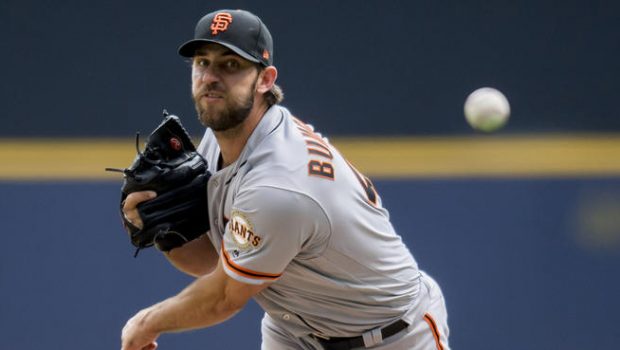 HOW MUCH ARE PHILS WILLING TO GIVE UP FOR MADISON BAUMGARNER?

While the Phillies hosted left ace Patrick Corbin yesterday at Citizens Bank Park, there are rumblings from San Francisco that they have interested in another southpaw.

Multiple sources have told Jon Paul Morosi of Fox that the Giants may deal their ace and three-time World Series champion Madison Baumgarner.

The Brewers and Phillies are among the teams that have had at least preliminary dialogue about trading for Bumgarner, sources say.

The Phillies covet a left-hander to complement their right-handed-dominant rotation, whether Corbin or J.A. Happ via free agency or Bumgarner in trade.

If the Phillies refuse to trade top pitching prospect Sixto Sanchez, the Giants could ask for right-hander Adonis Medina, whom the Phils were prepared to trade to Baltimore in July for a half-season of Manny Machado.

Phillies right-hander Zach Eflin — included in recent trade talks with the Diamondbacks about Paul Goldschmidt, according to The Athletic’s Jayson Stark — is another candidate to be involved in Bumgarner negotiations.