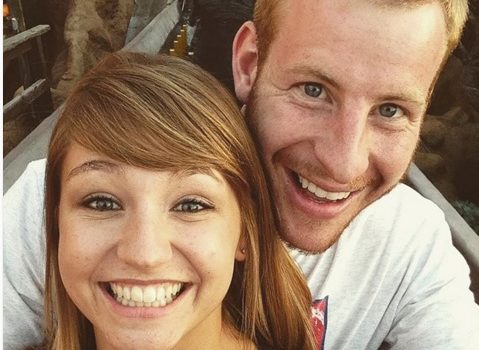 Carson Wentz is flying high with the Eagles — not to mention with girlfriend Melissa Uhrich, too.

A fellow North Dakota native, Uhrich and longtime beau Wentz are high school sweethearts. Though the couple went on to different colleges, Wentz to North Dakota State and Uhrich to Concordia College in Minnesota, they both excelled on the field as athletes, as she ran cross country.

While Wentz has since turned pro and become the Birds’ prized franchise quarterback, Uhrich continues to support him as she did during their college years. And while she won’t hesitate to take his cellphone away during date nights — he was caught watching game film under the dinner table — she understands how much her boyfriend is dedicated to his craft.

“I told NFL scouts, if you ask him to work 60 hours, he’s going to work 80 hours,” North Dakota State offensive coordinator Tim Polasek told CBS Sports in March. “In that off time, he’s going to be with his two companions — his dog and he’s got a significant other.”

Though Wentz and Uhrich enjoy a game of mini-golf every now and again, the fair-haired beauty loves herself some girl time and patriotic-themed BBQ with pals.

Despite Wentz’s grueling schedule, Uhrich is ready to be an NFL wife as both she and her future husband have marriage on their minds. As Wentz shared with ESPN ahead of the 2016 draft, he and Uhrich will live separately until they say “I do.”

“That’s really important to both of us, and to both of our families,” he said.