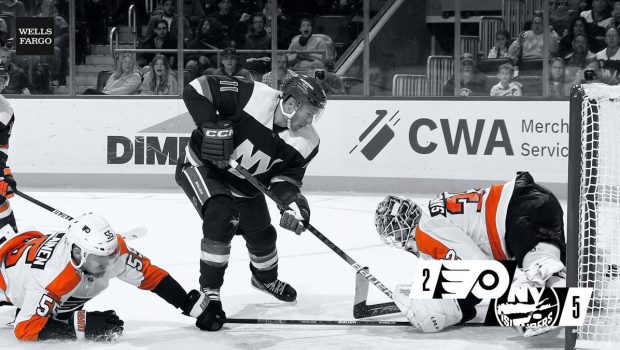 Nelson made it 3-2 with his 11th goal of the season, beating Flyers goaltender Felix Sandstrom with a high shot from the left circle at 2:57.

Beauvillier made it a two-goal margin with his fifth at 3:19. Ryan Pulock assisted on both third-period goals and had four assists overall for New York, tying a career best. The Islanders are 13-2-2 in their last 17 games against the Flyers, including a 6-0-0 mark in their last six home meetings.

The injury-depleted Flyers are 0-7-3 in their last 10 contests and haven’t won since Nov. 8.

“There were a few minutes in the third where we lost the hockey game,” Flyers coach John Tortorella said. “We are just going to keep banging away at it. I saw a lot of good things tonight. I am not going to criticize the team.”

Lukas Sedlak and Joel Farabee scored to put the Flyers ahead 2-1 before Parise tied it at 2 on the power play late in the second. Kevin Hayes had assists on both Philadelphia goals.

The Islanders lead the NHL with 35 third-period goals, outscoring opponents 35-19 in that period this season. New York has 42 goals in first periods, second periods and overtime combined.

Islander defenseman have also scored 18 goals this season, a contribution that heartens their coach Lane Lambert.

“We feel we need our defense in order to create offense,” he said. “They’re doing a good job of it.”

The struggling Flyers were coming off a 4-1 home loss to Pittsburgh on Friday.

“They had two quick ones we kind of buried ourselves after that,” Hayes said of the Islanders’ early third period outburst.

Philadelphia’s next five games are at home, giving them a chance to reset in the tightly contested Metropolitan Division where they started 7-3-2 before their current swoon.

“I think we forechecked pretty well. We just have to keep working,” said Sedlak, who assisted on Farabee’s goal. “We have to keep digging every shift and focus on the shift in front of us.”