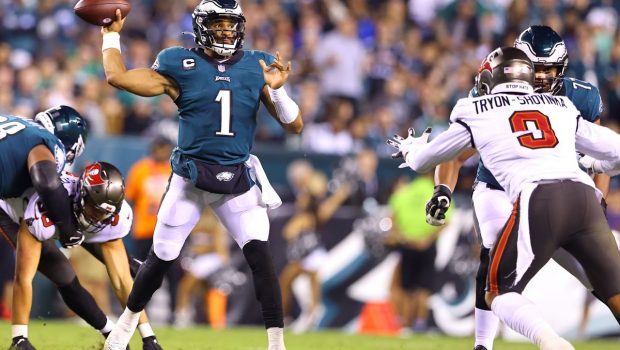 HOW LOSING TO THE BUCS IN WEEK 6 TURNED EAGLES SEASON AROUND!

The Eagles are the talk of the NFL, which cast them into the ash heap after a 2-5 start, only to see them finish like gangbusters and make the Wild Card next Sunday at Tampa and pretty boy Tom Brady.

How did they do it?

Here’s what happened: When the Eagles lost on a Thursday night in Week 6 to Tampa and fell to 2-4, the coaches used that sort of weekend mini-bye to examine what they were doing on offense, and how they could be more efficient. They decided to run more two- and three-tight-end packages, to both protect quarterback Jalen Hurts better and to boost a run game Sirianni hadn’t used to its max. “We thought it’d allow Jalen to see the field better too, to have a little more time,” Sirianni said.

The Eagles fell to 2-5 the following week at Las Vegas, beginning to use the new offense. Then Sirianni put the new offense into high gear. In the first seven games, Philly went 2-5 and averaged 23 rushes per game. In the next four, the Eagles were 3-1, ran it 44 times a game, and Hurts turned it over once while rushing for 65 yards a game.

That was the start of something big. Between Weeks 8 and 16, the Eagles ran for 194.3 yards per game, first in the NFL in that period. Jordan Howard, Boston Scott and Miles Sanders took turns gashing foes. After a real clunker loss to the Giants in Week 12, the Eagles reeled off four straight wins to clinch a playoff spot. They’ll be a sneaky tough foe on Wild Card Weekend for Tampa Bay. Philadelphia plays at the No. 2 seed Bucs on Sunday at 1 p.m. ET.

Using 12 and 13 personnel groupings (two- and three-tight-end formations), it turns out, has saved Sirianni’s rookie year. And it all came from the brainstorming in the mini-bye after the Thursday night loss in October.

“For as tough as it is to get ready to play on Thursday night,” Sirianni said, “you get some benefits from it. The players can rest, and we can work on some self-scouting that we might not have time to do during a regular week. Sometimes, as a staff, you’ve got to swallow your pride and change course. And since midseason, we’ve been one of the higher 12- and 13-personnel teams in the league. I can tell you, that really helped us. One way it helped was we didn’t have to put as much on Jalen with the running game performing so well.”

In the meantime, Hurts has done his best to convince Eagles GM Howie Roseman to use the team’s three first-round picks next year on non-quarterbacks. “One of his best qualities is he’s totally unfazed by things,” Sirianni said. “He plays a bad game against the Giants, Gardner Minshew comes and plays great to beat the Jets, this city’s got a big quarterback controversy, and Jalen just comes back and has his best three-game stretch. It doesn’t bother him. Great example: Did you see when the stands collapsed at Washington after the game and fans spill out onto the field? Did you see Jalen? Never flinched. He’s there, just helping people.”