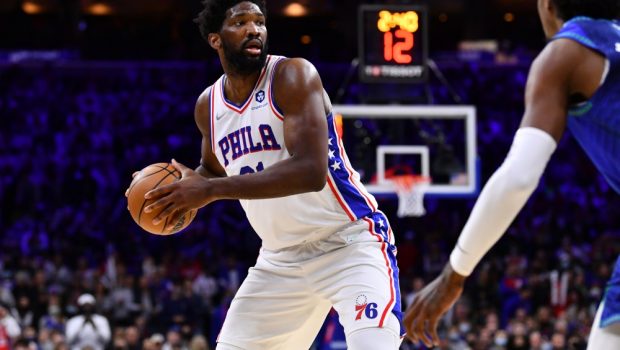 HOW LONG BEFORE SIXERS JOJO GETS HIS LEGS AND CARDIO BACK?

Siers center Joel Embiid is back after missing three weeks due to COVID, but…

After an explosive first game with 42 points and 14 rebounds, he has gone through the motions in the last two, going 7 for 33 from the field.

Embiid shot 3 for 17 in an 88-87 road loss to the Boston Celtics on Wednesday. He’ll look to rebound when the Sixers face another tough matchup Friday on the road against the Atlanta Hawks.

“Some guys come back quickly and play pretty well, a lot of guys have played the one great game when they’re back and then go into a little fog,” Sixers head coach Doc Rivers said of Embiid. “You can tell he’s definitely struggling just getting going. We just gotta keep playing him and let him play through it.”

Embiid did grab 18 rebounds against the Celtics.

“I will never use it as an excuse, but it’s gonna take me a while to get back especially legs and cardio and all that stuff,” Embiid said. “Every single day, I just gotta keep working hard and keep getting better.”

Seth Curry led the way with 17 points, and he said that the Sixers will continue to run the offense through their All-Star in Embiid.

“Some nights you’re not getting those calls, some nights it’s on us as teammates, just try to attack and make it easy on him when we get the opportunity,” Curry said. “We’ll go to him so that’s not gonna change. So we got to just figure out ways to get him going.”

The Hawks will be searching for their second straight win when they host the Sixers.

In their most recent game Wednesday, the Hawks defeated the Indiana Pacers 114-111.

“I’m getting to my spots and I’ve worked really hard on making my jumpers,” Young said. “And the other guys are making plays, too. If they don’t make plays, I don’t get as many good looks.”

“We made it tougher on ourselves at the end and a lot of that is on me,” Young said. “I’ve got to do better at closing the game and I almost gave the game up with that turnover at the end, but I’m glad we’re able to learn in a win.”

Hawks head coach Nate McMillan missed Wednesday’s win as part of the league’s health and safety protocols. It’s unclear whether he will be on the bench against the Sixers.

One thought on “HOW LONG BEFORE SIXERS JOJO GETS HIS LEGS AND CARDIO BACK?”