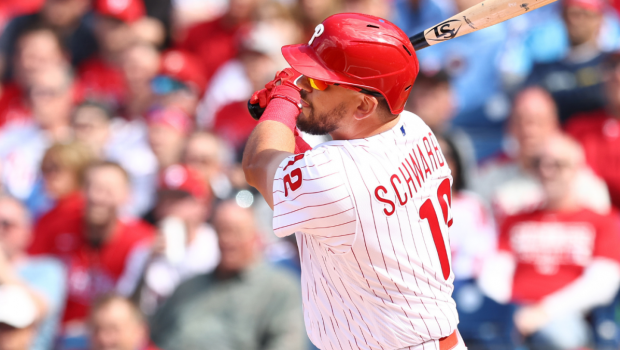 HOW KYLE SCHWARBER COMPARES TO THE BABE AS JUNE SWAT SULTAN!

Which computes to about 9.4% of his at-bats in June.

Schwarber, who spent the early part of his career with the Cubs before splitting time between the Nationals and Red Sox and then signed with the Phillies for this season, boasts the best-ever HR ratio in the month of June after hitting his 12th tater of the month yesterday, a three-run jack against the Braves.

Schwarber, who is tied for second place in the home run race this season with Mike Trout with 23 dingers, led MLB in longballs last month, one ahead of HR leader Aaron Judge (29 on the year) who had 11. On pace for the best season of his career, at least in terms of power hitting, Schwarber actually had a better June last year when he hit .280 with 16 homers, 30 RBIs and a 1.112 OPS for Washington.

Kevin Long, who is the hitting coach for the Phillies but worked for the Nationals last year, has gotten a chance to see the Schwarber show firsthand in both ’21 and ’22. “He was probably the best hitter I’ve ever seen doing my job last June,” Long said before Thursday night’s 14-4 win over Atlanta. “It was, ‘Don’t take your eyes off him because he’s going to do something special.’ This has been a very similar run.”

Inked to a four-year, $79 million contract during the offseason, Schwarber is looking like a bargain for Philly. He’d be an even better deal if he could figure out why he heats up in June and then do the same in the season’s other months.

“To be honest with you, I really don’t know,” he told the Inky.

Despite firing their manager and losing All-Star Bryce Harper to injury in June, Schwarber and the Phillies went 19-8 during the month and are now 40-37 on the season. They host a three-game set against the St. Louis Cardinals this weekend.