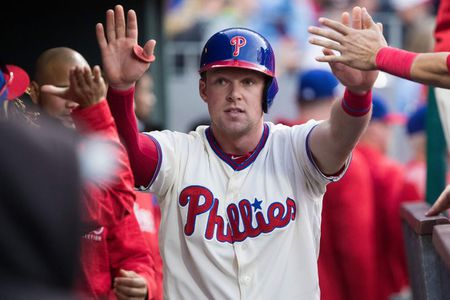 HOW HOSKINS IS LEADING THE PHILS DESIGNATED HITTER EXPLOSION!

Before last night’s 6-0 win over Washington, the Phillies ranked fifth in the National League with 168 runs, and they had played four to seven fewer games than the top four.

Even if that small sample is not connected to the designated hitter, the Phils have benefited all season from the ability to seamlessly turn their lineup over in the American League style.

“I think our roster speaks for itself,” said Rhys Hoskins, after hitting a home run in a third consecutive game.

“You’ve seen the last 10 or so days how our offense has really started to click. Guys are getting into a rhythm. There have been real professional at-bats, one through nine, from the first pitch to the last. And that just wears teams down.”