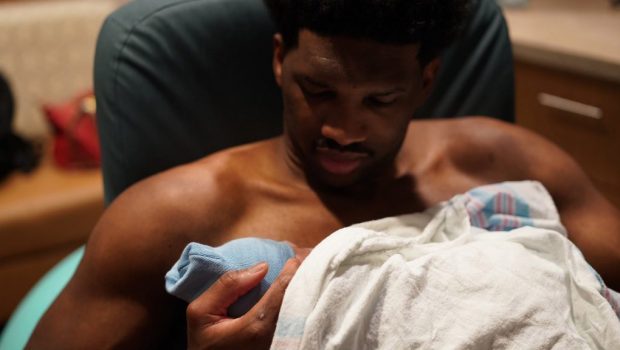 HOW FATHERHOOD HAS FORCED SIXERS JOJO EMBIID TO GROW UP!

Joel Embiid has gotten off to the best start of his NBA career.

He’s in shape to run the floor, even at the end of the game.

He has a new coach who has won titles and seems able to push the Sixers beyond their comfort zone.

And he has new pieces that make this year’s team a real contender in the East and beyond.

He had made no secret of his misgivings about restarting the 2020 NBA season amid the COVID-19 pandemic.

He’d talked about it on videoconference calls with reporters and in private conversations with Brooklyn Nets guard Kyrie Irving. He’d voted against it when the National Basketball Players Association held its call with the Sixers.

“Nobody knows the complications in your body in the future, if you get it,” Embiid told ESPN. “Nobody can tell you that.”

But when the players ultimately elected to play, in a vote of team representatives, Embiid had a choice to make: Sit out or show up to play.

“If I didn’t think we had a chance to win, I wouldn’t have gone,” Embiid said.

His giant personal protective equipment suit was his form of protest. Of calling attention to himself and the misgivings he and other players still felt.

But there was something else he couldn’t say to anyone but his closest friends and advisers back then. Something he hadn’t even told the Sixers, yet:

His girlfriend, Anne de Paula, was eight months pregnant with their first child.

“We tried to keep it a secret,” Embiid said. “Because people have bad intentions and bad energy. … So it was very hard for me to go. I just wanted to be there with her and for him. I only went [to Orlando] because I really thought we had a chance to win.”

There are people who will read that quote, or see the rather hilarious clip of Embiid walking around in the personal protective equipment, and question his commitment. Embiid knows that. Or rather, he has learned that while riding the ups and downs of the fame cycle these past few years.

But fatherhood has a way of clarifying one’s priorities. And as soon as he learned he was about to become a father, Embiid started feeling a new sense of purpose.

“Everything that you always thought about life changes,” Embiid said.

He wanted his son, Arthur, to be proud of him one day. Anything that helped him do that is what mattered now.

In 2017, at the height of his popularity, when the NBA world and especially the city of Philadelphia were in the honeymoon stage with the effervescent leader of the Sixers, Embiid mentioned he expected the affection and attention would be short-lived.

“People always want something new,” he said then.

It was an astute observation about the modern media cycle, but also of human nature. At the time, Embiid and the Sixers seemed like the NBA’s next big thing. He was funny and fresh. His skill set was dazzling. His potential seemed unlimited. And the charming story of the team that took tanking to its ideological extreme seemed to be working as Embiid and teammate Ben Simmons blossomed into superstars.

But that was three years and three playoff disappointments ago. Contemporaries such as Anthony Davis and Giannis Antetokounmpo have won the championships and MVP awards for which Embiid seemed destined. Last season, Embiid didn’t even make the All-NBA team, despite statistics that compared favorably to his previous campaigns. This season, Philadelphia wasn’t even picked to play a Christmas Day game.

“It comes down to winning,” Embiid said. “If you don’t win, you don’t get respect. The league doesn’t respect us as much anymore because we didn’t live up to the hype we were on the way to three years ago.”

He is not protesting this. He is processing it.

Sometimes things are that simple. The challenge for a curious soul like Embiid is to keep it that way. To trust in the only voice that never wavered: his own.