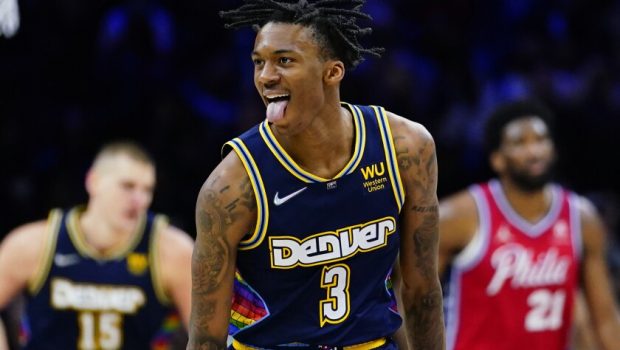 HOW FAR CAN SIXERS REALLY GO WITH THEIR SWISS-CHEESE DEFENSE?

As the Sixers enter the last month of the regular season, the question must be asked:

HOW FAR CAN THEY REALLY GO IN THE PLAYOFFS WITH A DEFENSE THAT CAN’T STOP ANYBODY?

And that issue was on full display at the Wells.

Bones Hyland made four decisive 3-pointers in the fourth quarter and scored 21 points to lead the Denver Nuggets to a 114-110 win.

Nikola Jokic had 22 points and 13 rebounds for Denver and Joel Embiid finished with 34 points in a battle of MVP frontrunners.

Jeff Green clobbered Embiid on a drive to the basket with 3:13 left and the All-Star center landed on his tailbone. Embiid immediately grabbed at his back, but walked off the court on his own power as the play was reviewed. Green received a flagrant foul and Embiid went 1 of 2 from the free-throw line to cut Denver’s lead to 107-106.

But Hyland stole the show from the All-Star big men, burying his fourth 3 of the fourth quarter for a 110-108 lead that the Nuggets held on to.

Jokic won the MVP last season and Embiid was runner-up, and the franchise stars are again considered the leading contenders to win it this season. Embiid entered the game leading the league in scoring at 29.8 points and Jokic was second at 26.1. He also averages 13.8 rebounds and 8.1 assists.

“He’s a great player, great competition, I love playing against the best,” Embiid said of Jokic. “He’s a monster. I love watching him. But he’s also easy to study.”

One big dent in Embiid’s MVP case last season came in games played. Jokic was a deserving winner, and played in 72 games and logged 2,488 minutes to Embiid’s 51 games and 1,585 minutes.

“I think Joel wants to play more. He said that at the end of last year,” 76ers coach Doc Rivers said. “He said, ‘I want to come in in better shape. I feel like I need to play more games to help our team.’ It could be some of that. I’m just happy he’s playing more.”

The 76ers had eked out an overtime win a night earlier at 18-win Orlando, and Embiid looked fatigued down the stretch Monday. He played the final minutes with five fouls and was a helpless bystander as the Sixers outside shooters missed open looks. The worst sequence came when Georges Niang clanged one of the side of the backboard and missed the follow-up with Denver up 113-110.