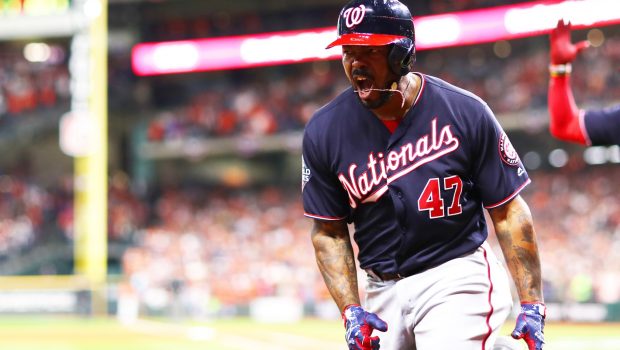 In case you didn’t stay up to watch last night’s World Series game 7, Phillies fans should have a small slice of pride.

Thirty-six-year-old Howie Kendrick was the hero for the Nats!

His two-run homer, which came when the Nationals were trailing, put them ahead for good.

The Nationals acquired him from the Phillies, before the Phillies went all in, in a post-waiver deadline deal that cost them a minor league left-hander and nothing more. They signed him to a two-year deal before the 2018 season — figured he would be a nice bench piece to have around.

Moments earlier, the Nationals were eight outs away from ending their season agonizingly close to a title, exhibiting no signs of the magic they had shown over and over when the end seemed near. And then, just like that, they stared down logic yet again, this time with a home run that somehow hung in there — just as they had done all season.

Zack Greinke was dominating the Nationals. They tried to square up his curve and failed. When they swung at his fastballs, they chopped them to the infield. For six innings, they simply had no chance.

But then came the seventh, which began like the others — with a routine groundball to first. Then came Anthony Rendon, who had worked Greinke deep into counts in his earlier at-bats but had never gotten much further than that. This time, he homered. In the seventh inning or later of the five elimination games the Nationals played this October, Rendon has doubled three times and homered three times.

Then Soto walked. Greinke had pitched carefully to Soto before, so that he walked him didn’t necessarily signal that he was starting to tire. But Houston Astros Manager A.J. Hinch didn’t wait. He called on Will Harris to face Kendrick. Harris pitched to a 1.50 ERA in 68 appearances this year. He struck out more than a batter an inning. Kendrick had faced Harris three times this series. He was 0 for 3 against him. The matchup made sense.

Were this game being played in Washington, Kendrick might not have been next to bat. When the Nationals faced Greinke at home without a designated hitter, Manager Dave Martinez chose Asdrúbal Cabrera to start at second base instead of Kendrick. His career numbers against Greinke were far better than Kendrick’s. They were far better than most Nationals’ numbers actually.

But because the game was in Houston, Kendrick was hitting fifth. He swung through a curveball. Then Harris threw him a fastball, low and away and on the black — a pitcher’s pitch, the kind the best hitters in baseball hope to hit hard the opposite way. Kendrick, a .294 career hitter who never seems to get the credit he deserves for that statistical consistency, hit a line drive the opposite way. It began to sink and seemed destined to dive into the outfield wall or grass. It sliced toward the foul line and seemed destined to curl into foul territory.

But before it could fall or go foul, before the Nationals’ bench, willing and prodding it to stay fair, could exhale in disappointment, something unthinkable happened: The ball did exactly what the Nationals — and thousands of fans watching at rainy Nationals Park and who knows how many more yelling at televisions around the District — were willing it to do: It hit the foul pole.

“Stay fair!” Kendrick said, when asked for his thoughts, his sons next to him after the game.

“I knew it had a chance, but I thought it might have hit the wall. But I like Chick-fil-A a lot. I’m so happy it hit the pole.”

For world champion Nats, the team that wouldn’t die, there was no doubt, just hope

Asked later, Kendrick said his grand slam against the Dodgers was still the most memorable moment of his career. But that World Series homer will linger in the minds of everyone else, like his family, who yelled, “Dad made history!” when he found them in the mob. Or Harolyn Cardozo, Mike Rizzo’s longtime assistant, who walked over to him in tears and wrapped him in a hug.

“It was all worth it,” Kendrick told her, feet firmly on the ground again. Kendrick is normally the grounded one, the mature presence, the vet.

But he was also the one at the center of that celebration, which was all the more remarkable because it was orchestrated. Kendrick and the Nationals had done it all before. They had been celebrating remarkable turnarounds all season, enough that everyone in the dugout knew their place — enough that Kendrick, the grizzled veteran, knew when to hop and where to bounce, when to spin and when to yell. He and the Nationals spent so much of this season dancing, and thanks to that seventh-inning swing, they don’t ever have to stop.