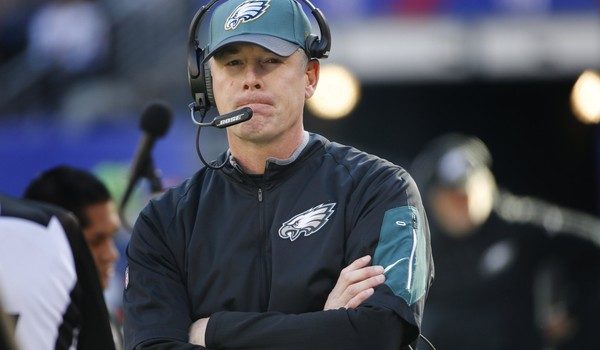 The Giants are wondering too.

While several players privately were scratching their heads at the way Shurmur seemed to abandon Barkley in the second half, the Giants’ receivers were questioning why the Giants’ passing game wasn’t more aggressive against a thinned-out Eagles secondary. Everything went so great in the first half when the Giants had 346 total yards. Eli Manning threw for 236 and Barkley ran for 94.

But in the second half, Barkley, Odell Beckham Jr. and the entire Giants’ offense disappeared.

But his players sure sounded like they thought Shurmur’s play calling was to blame, especially against an Eagles secondary that featured two cornerbacks with a combined seven NFL games of experience and who both made their first NFL start.

Asked why they couldn’t take advantage of the inexperience in the Eagles secondary, Beckham said:

“Honestly that’s a question for coach. That’s not really my kind of question. I don’t call the plays. I just do what I’m told to do and go out there and execute. Whenever I get the opportunity to do something I try to make the most of it. If I don’t have that many opportunities all I can do is do what I can when I do have the opportunity.

“Coming in, knowing that they struggled in the secondary, personally I would’ve loved to attack them. But it wasn’t in our game plan.”

“I don’t know why,” receiver Sterling Shepard added. “We were real confident in the run game I guess. We tried to attack them in the run game. It worked in the first half, but they made adjustments. And that was it.”

About that run game that the Giants were so confident in …

That was another bizarre part of Shurmur’s plan. He has said many times in recent weeks he thinks the Giants have to ride Barkley, and they certainly did in the first half to the tune of 15 touches for 131 yards and two touchdowns. Barkley, who had ripped the Eagles for 229 yards back in October, was dominating them again.

But in the second half, Barkley came off the field for Wayne Gallman on the second Giants series. And he only ran four times (for seven yards) overall.

Again, Shurmur blamed that on penalties and sacks, even though that was more of a first-half problem. There was also a series at the end of the third quarter and the beginning of the fourth when Shurmur ignored Barkley entirely and called three straight passes, two that fell incomplete and one which ended in a sack. The Giants at the time were nursing a 19-14 lead and trying to slow the Eagles’ momentum.

There were other mistakes, too. Like Shurmur’s inexplicable decision to go for two on the Giants’ first touchdown after a penalty moved the ball up to the 1. Shurmur said, “I was just feeling it.” The play failed. There was also the wasted timeout in the third quarter before a third-and-18 play that had little chance to work anyway. (It didn’t.)

“For the record, you never want to take a timeout when you don’t have to,” Shurmur said. “That’s the reality.”

The reality also is that Shurmur will feel the heat from this one. For much of the season all the focus has been on his 37-year-old quarterback. But Manning was 26-of-37 for 297 yards, and his lone issue in this game was an untimely interception at the end of the first half that kept the Giants from a possible field goal. Shurmur even took the blame for that call, though Manning took responsibility for the pass.

The problem for Shurmur, though, isn’t the heat from the outside; it’s the heat from within. Maybe the locker room isn’t going to fracture the way it did last season, but it’s clear some key players weren’t thrilled with the way this game was called.

Shurmur will have to address that, because with the playoffs all but out of reach, the rest of this season is about planting the seeds for next year. He needs his players to believe that he’s the one who can lead them the right way.

Do they believe that? They didn’t seem to on Sunday. At least not all of them.

“I know everyone wants to be a coach and think what we should call,” Barkley said. “But (the coaches) know what they’re doing. And they’re putting us in position to win.”

“They came out and made their adjustments and they just made better adjustments than we did,” Beckham said. “They ran better plays. They made the plays.”

“That’s a question for coach,” Beckham said. “Honestly, I don’t know. I don’t call the plays.”