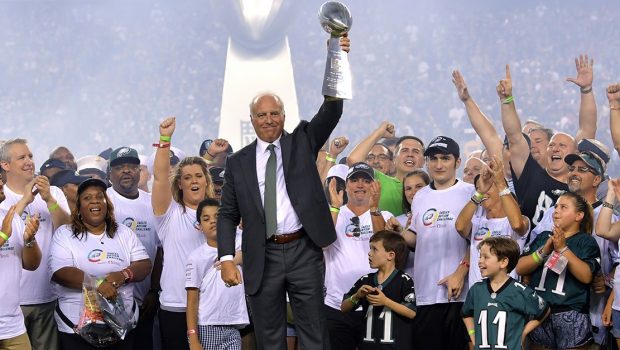 Other cities care about sports. None has ever simultaneously cared so much and lost so often. The Eagles’ arduous Super Bowl-less odyssey embodied the plight.

That’s why the hypothetical Sunday night, with City Hall engulfed by euphoria, had become, as 24-year-old South Philadelphian Shamus Clancy told Yahoo Sports, “the most mythologized day in Philadelphia’s history.” It was the subject of dreams; of stuck-in-traffic mind wanders; of summertime chatter.

Clancy even penned a college paper about it. And he opened the final paragraph with a sentiment that was far from uncommon. “All I imagine as I twist and turn in bed,” he wrote, “is that all of our lives will undoubtedly miraculously improve the day the Eagles win the Super Bowl.”

As the myth crystalized last February, prophecies of a changed city proliferated. The morning after, prophecies became proclamations.

Yet on a sticky Wednesday morning seven months later, peeved Philly taxi drivers huff like always. Young professionals scurry down Market Street. Children chirp about “Fortnite.” High-schoolers put the shoddy finishing touches on homework. With the Eagles’ opener 36 hours away, the anxiety, for some, began to set in.

All of which begged the question: Has the Super Bowl genuinely transformed the town it taunted for so long

To comprehend how Philly has changed, one first must comprehend what it is and was.

Once upon a time, it was the birthplace of America, the most important city in the United States. Two centuries later, it was spiraling, its manufacturing might drained by an evolving world. Between 1950 and 2000, it lost more than a quarter of its population.

As residents fled and jobs evaporated, Philly’s reputation deteriorated. It was smaller than New York, unimportant compared to Washington, and in the shadow of both, unlike Chicago.

It was the nation’s fifth-biggest city, the second-biggest on the East Coast, more than twice the size of the third. Yet it was rarely treated with corresponding respect.

All the while, its teams were losing. A lot.

Now it has six!