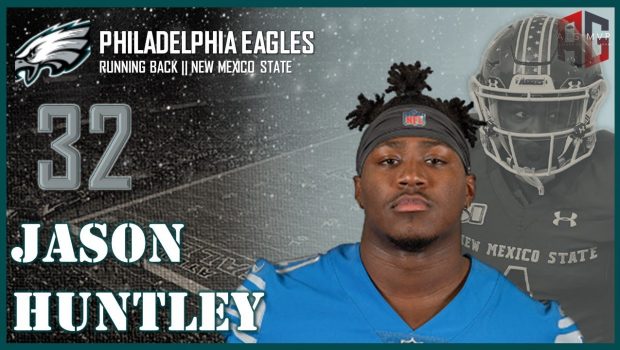 The Eagles were bummed to see Jason Huntley go off the board in April’s NFL draft.

Huntley was a big-play running back at New Mexico State when the Detroit Lions chose him in the fifth round.

So when the Lions waived Huntley as part of their 53-man roster cutdowns, the Eagles weren’t going to let him get away.

“We are excited about this player,” Pederson said. “Excited about Huntley, excited to get him in the mix.”

The Eagles already knew he had big-time speed and had more than 2,000 rushing yards, more than 1,500 kickoff return yards and more than 1,000 receiving yards in his college career.

“He was a guy, a player that we had actually targeted back in the draft and through the draft process,” Pederson said. “He was on our draft board with many guys but obviously he caught our eye back then when we were evaluating running backs.”

It’s not known yet whether Huntley will be up to speed enough in the Eagles’ offense to be active in Week One, but the Eagles believe he can contribute as a rookie.