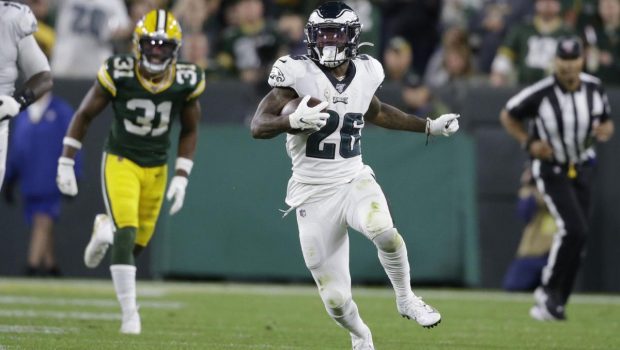 HOW EAGLES NEW-FOUND RUNNING GAME WILL GROUND THE JETS!

The Eagles beating the Green Bay Packers 34-27 last Thursday night on historic Lambeau Field was a W the Eagles desperately needed to stay viable in the NFC East and NFC conference standings.

It’s no coincidence that the ground game started clicking for the first time this season, getting the dub with 176 yards on the previously top-ranked Pack defense. Jordan Howard pounded them for 87 yards on 15 carries, 5.8 per run. Howard ran angry, got down and dirty yards in the red zone, scoring 3, one in the air, two on the ground.

Rookie Miles Sanders (above) shook off a tough game against the Lions the week before to have his best outing. Sanders ran for 72 yards on 11 carries, he also had a huge 67 yard kickoff return that jump started the Birds docile offense up to that point.

Carson Wentz was an efficient 8-for-13, including two TD passes to go along with a 113.1 passer rating. Having a balanced attack for the first time in these first four games gives us a glimpse how potent this team can be putting up a season high 34 points!

The Birds welcome the New York Jets to LFF next Sunday, October 6, 1pm/CBS