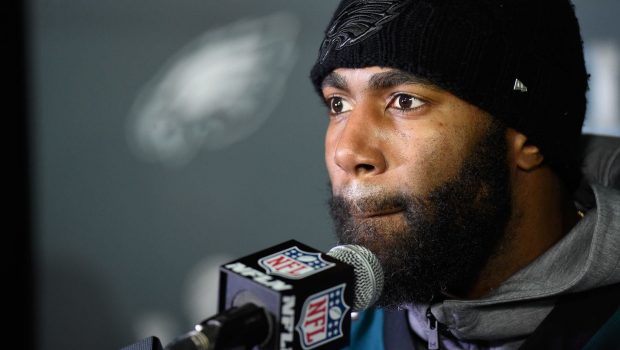 HOW EAGLES MALCOLM JENKINS BECAME THE FACE OF PLAYER PROTEST

About midway through the national anthem before the Eagles’ final preseason game, the locker room opens and out walks the team’s strong safety: eyes forward, expression blank.

Malcolm Jenkins’s face is familiar, but even in the city that celebrated its first Super Bowl championship with a parade seven months ago, it is not famous. Jenkins wore dark aviators to the parade that covered his brown eyes, an Eagles beanie that concealed his thick eyebrows and a smile that was framed by a thick beard with a few gray strands.

But a new season is upon Philly and the NFL, and Jenkins will once again play a leading role. For a third consecutive autumn, player protests are expected to cast a shadow over the action on the field, although for the first time neither of the movement’s founders — two years ago, former San Francisco 49ers teammates Colin Kaepernick and Eric Reid began kneeling during the national anthem to bring attention to police brutality toward African Americans — is in the league to participate.

The league office and franchise owners will again try to shift attention away from the sidelines and back to the field as television ratings slip, the audience grows impatient and President Trump lands body shots against a league that once looked impenetrable. Around the time they find a solution for the issue, Jenkins says, it’ll be time for players to find an entirely new way to protest.

“Me personally, I really want to get this conversation to move away from the anthem,” he says. “I think it has served its purpose.”

The statement is not a declaration of his intentions — he remained noncommittal on how he would approach the anthem this year, as the league’s policy remains on hold while owners and players’ union reps hold discussions — but it provides a window into Jenkins’s analytical mind, the one with which the league must now contend: